The building should be a composition of happy simplicity. We aim to create a design that is very appealing for its residents, as well as positive for the urban environment - but without forgetting a certain formal restraint that fits within the limitations of the budget. These drawings show the general outline of our proposal, which can be adjusted and completed in future stages of work.


The volume is placed along the length of the perimeter that faces the streets, creating a U-shaped structure. This provides for a large internal courtyard protected by the building itself and that ensures privacy in relation to the public realm. In addition, a clear continuity is established with the alignments of the facades of the rest of the neighbouring blocks, following the pattern of the urban fabric.

The facade is composed of earth-coloured precast concrete modules. Its many voids and screens ensure protection from direct sunlight, while at the same time creating rhythm and diversity for the building. The vertical circulation volume becomes the counterpoint for the composition. This element is a glass box protected from the sun by a metal screen that allows glimpses of the helicoidal staircase within.

We decided to add an extra feature to the dwellings, going beyond a common duplex and proposing apartments over three levels. By locating the entrance in the middle floor, where the living areas are located, the residents only have to take one flight of stairs up or down to reach their bedrooms. In this way vertical travel movements are almost the same as in a duplex.

The first benefit of this typology is to increase the perceived value of the dwellings. A residence built over three floors, instead of two, will give potential customers the sensation that they are acquiring something more than a simple apartment. A value that is increased by the fact that all of the two- and three-bedroom dwellings have their own private roof terrace.

The second benefit is a significant release of space on the ground floor. The impossibility of underground parking obliges us to use part of the area at street level for this purpose. By placing almost all of the volume of the building between the first, second and third stories, we compensate for the space occupied by the cars and provide an open and generously sized recreational space.

The third benefit is the access method for the two and three bedroom dwellings which consists of a single corridor located on the second floor. Consequently, we can increase the space used for the internal areas of the dwellings. These corridors are open spaces that, on the one hand, do not comprise BUA, and, on the other, as they are open to the air but covered over, enrich the experience of using the building.

The fourth benefit is the privacy that is achieved for the most valuable dwellings, those with two and three bedrooms, as none of these are located on the ground floor. That is to say, twenty-one dwellings benefit from this. Only those of lesser value, the four one-bedroom apartments, are located on the ground floor. To compensate for this, they are placed in one of the areas most distant from the entrance to the complex.

The fifth benefit is the work of simplification which achieves only one typology for each of the three sizes of dwelling. This is, without a doubt, a factor that will reduce both costs as well as management and construction times. Added to this is the fact that all of the dwellings have cross-ventilation which will reduce air-conditioning costs and will increase the internal comfort of the apartments.

And finally, the sixth benefit. The releasing of the ground floor allows for the shade from one of the wings of the building to be used to locate the parking area under it and protect the vehicles from the sun without the need for additional structures. In addition, since it is located on the lowest part of the site, its visibility is restricted from the common area, as can be seen from the section drawing. 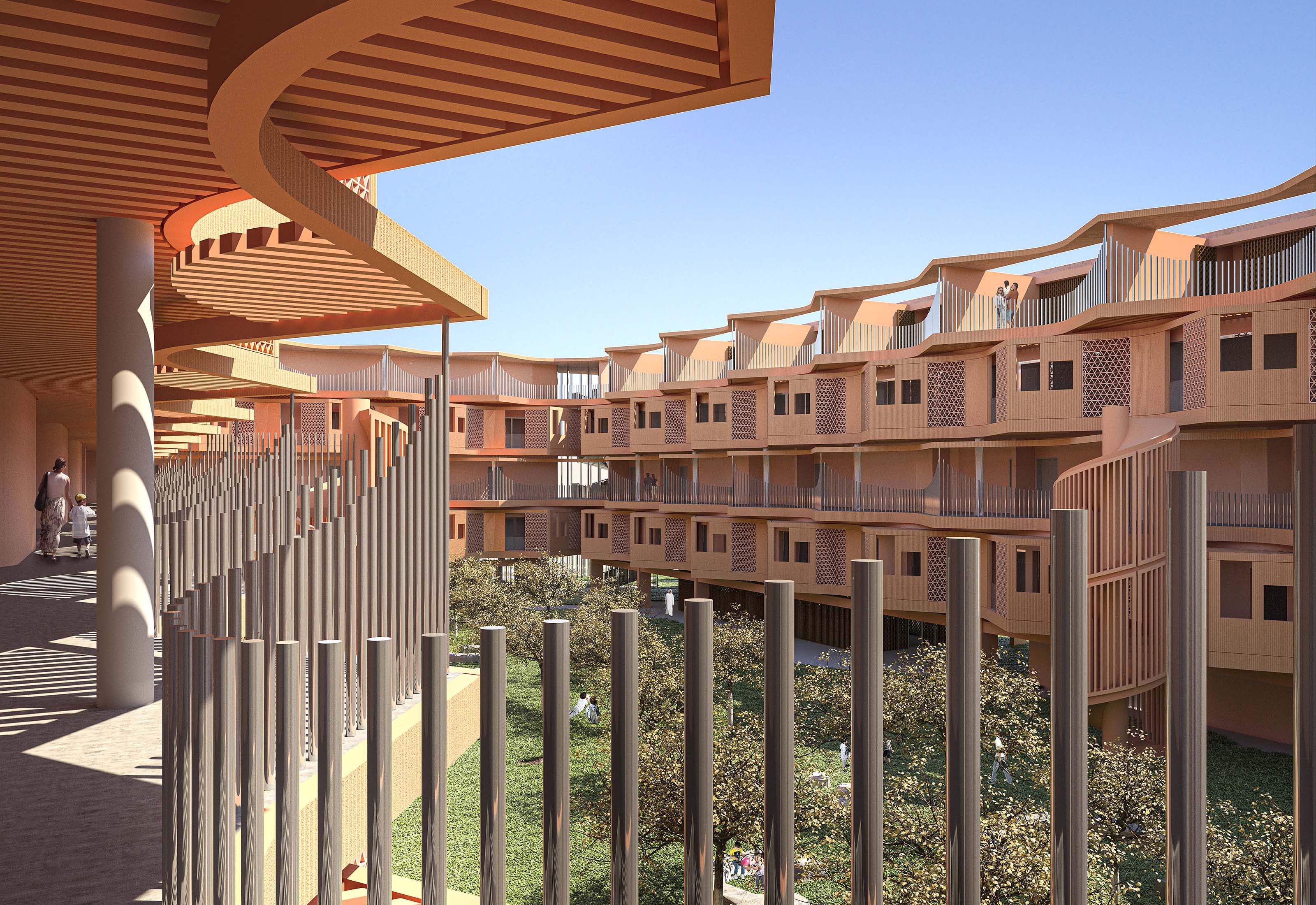 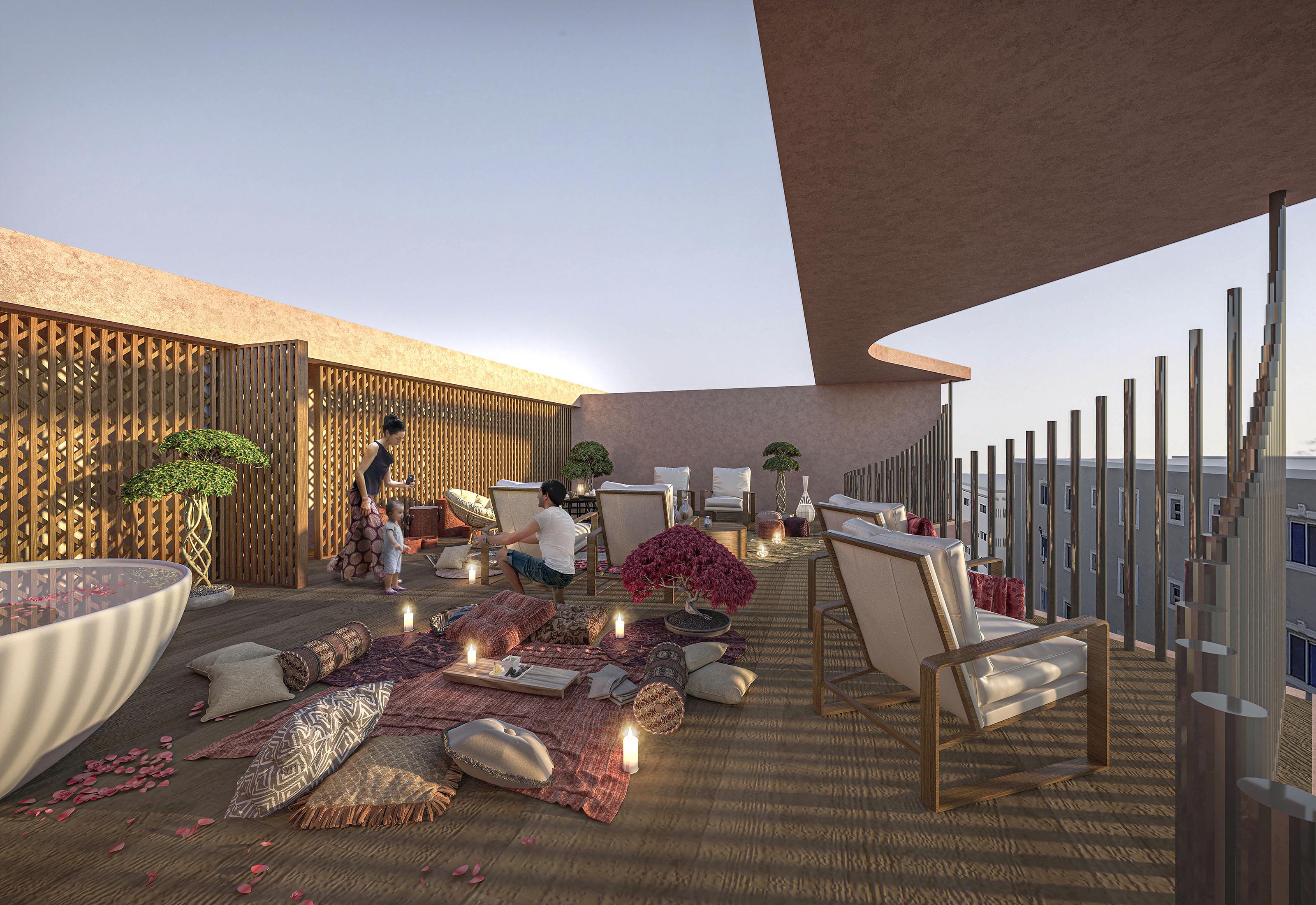 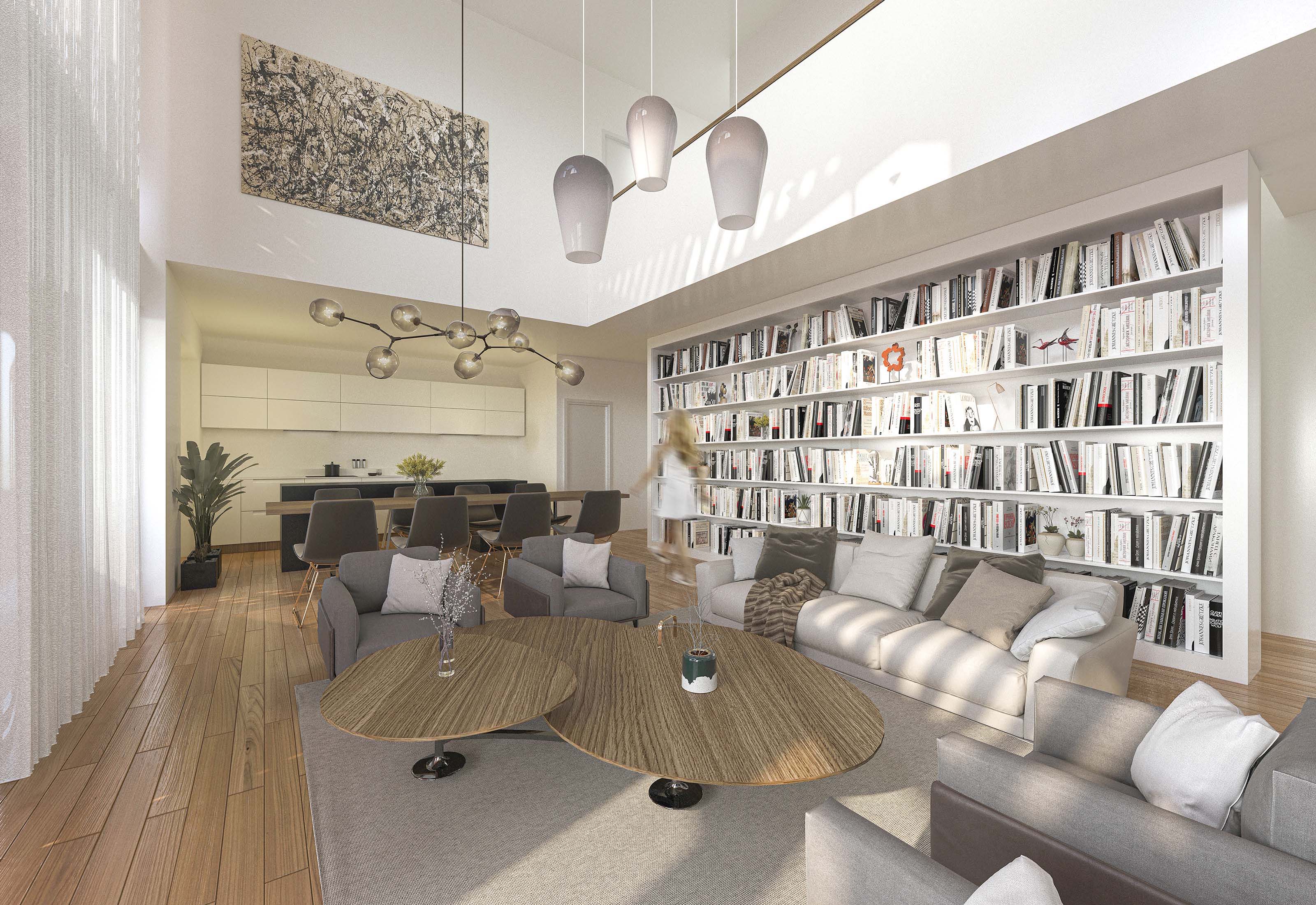 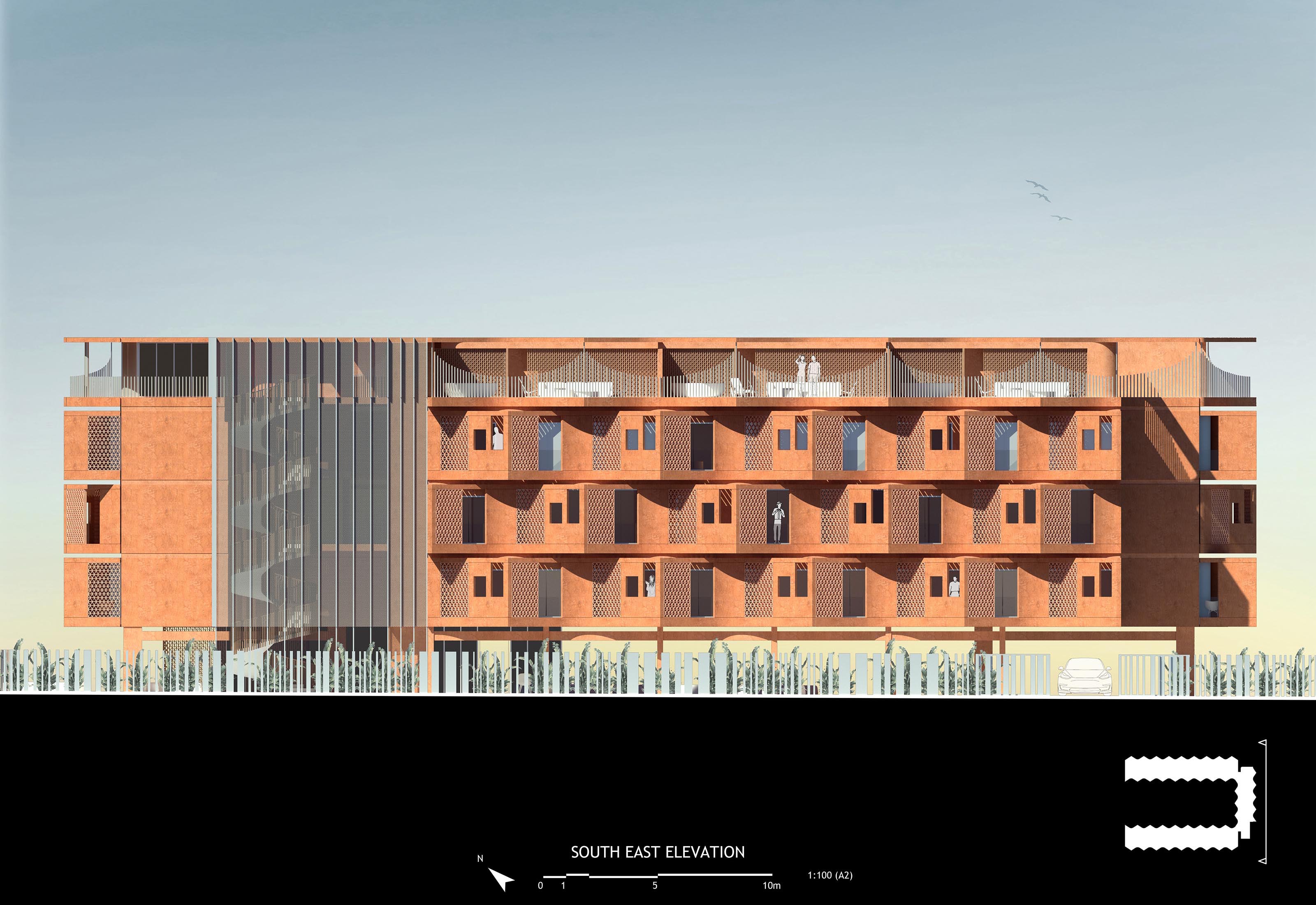 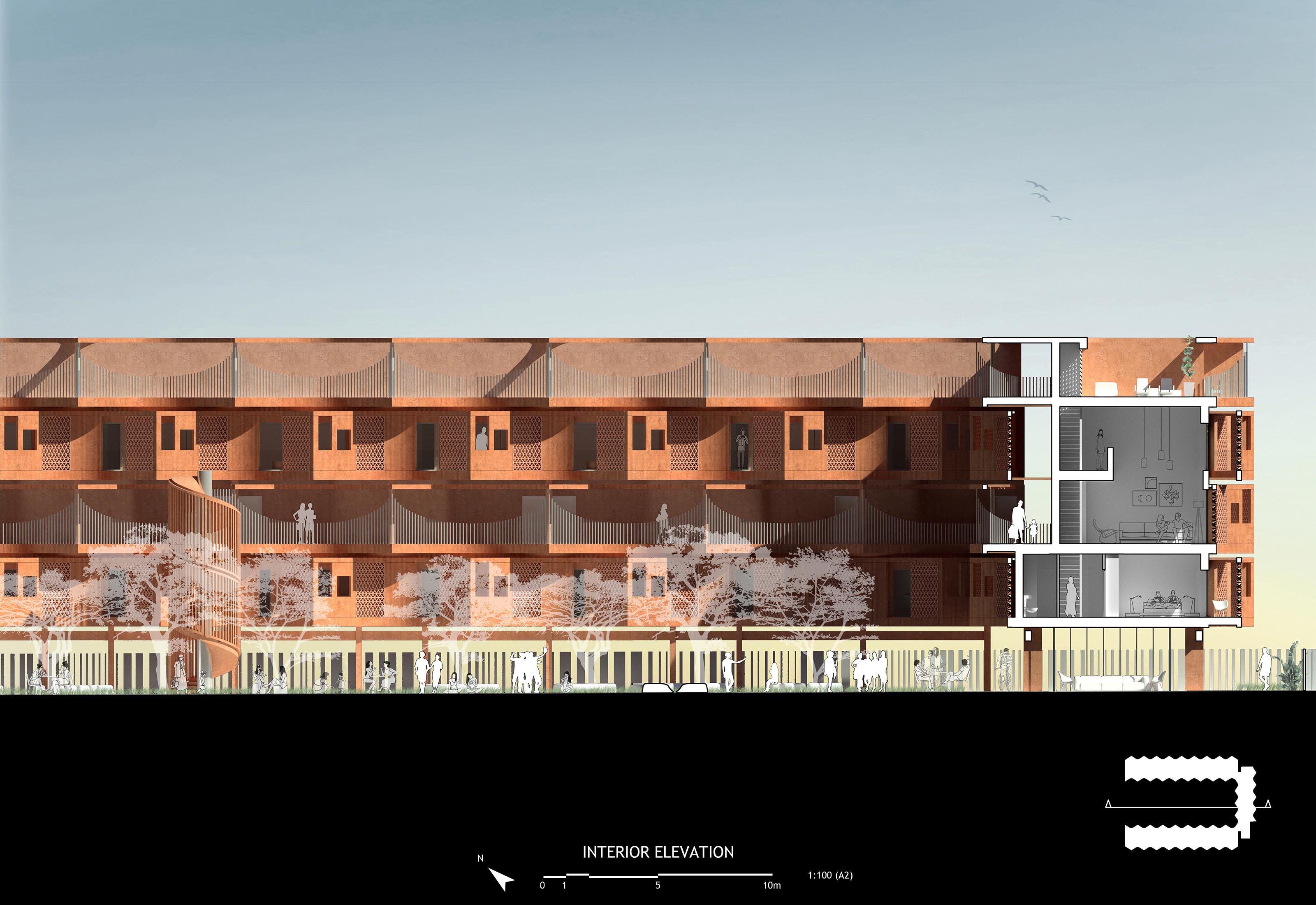 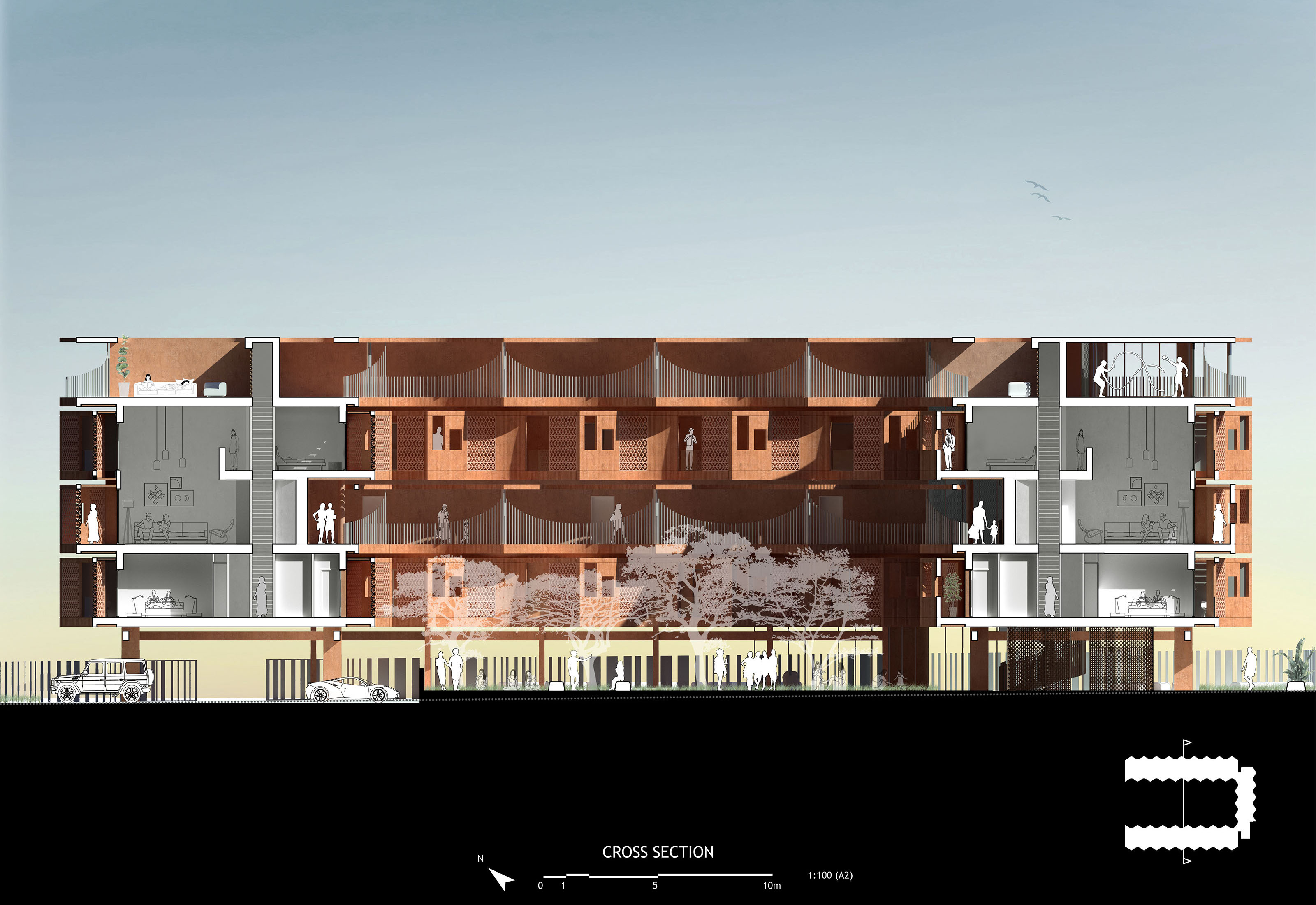 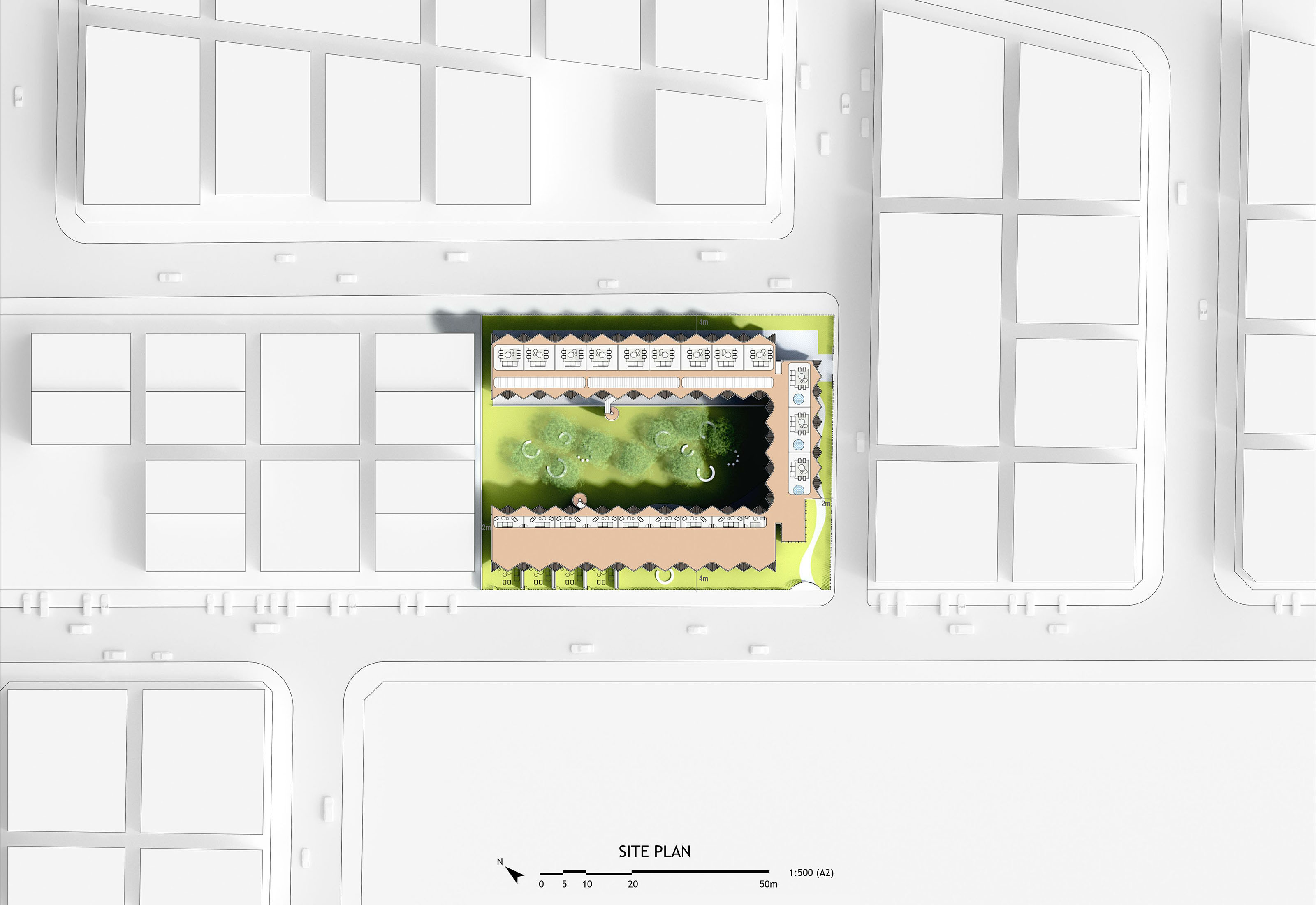 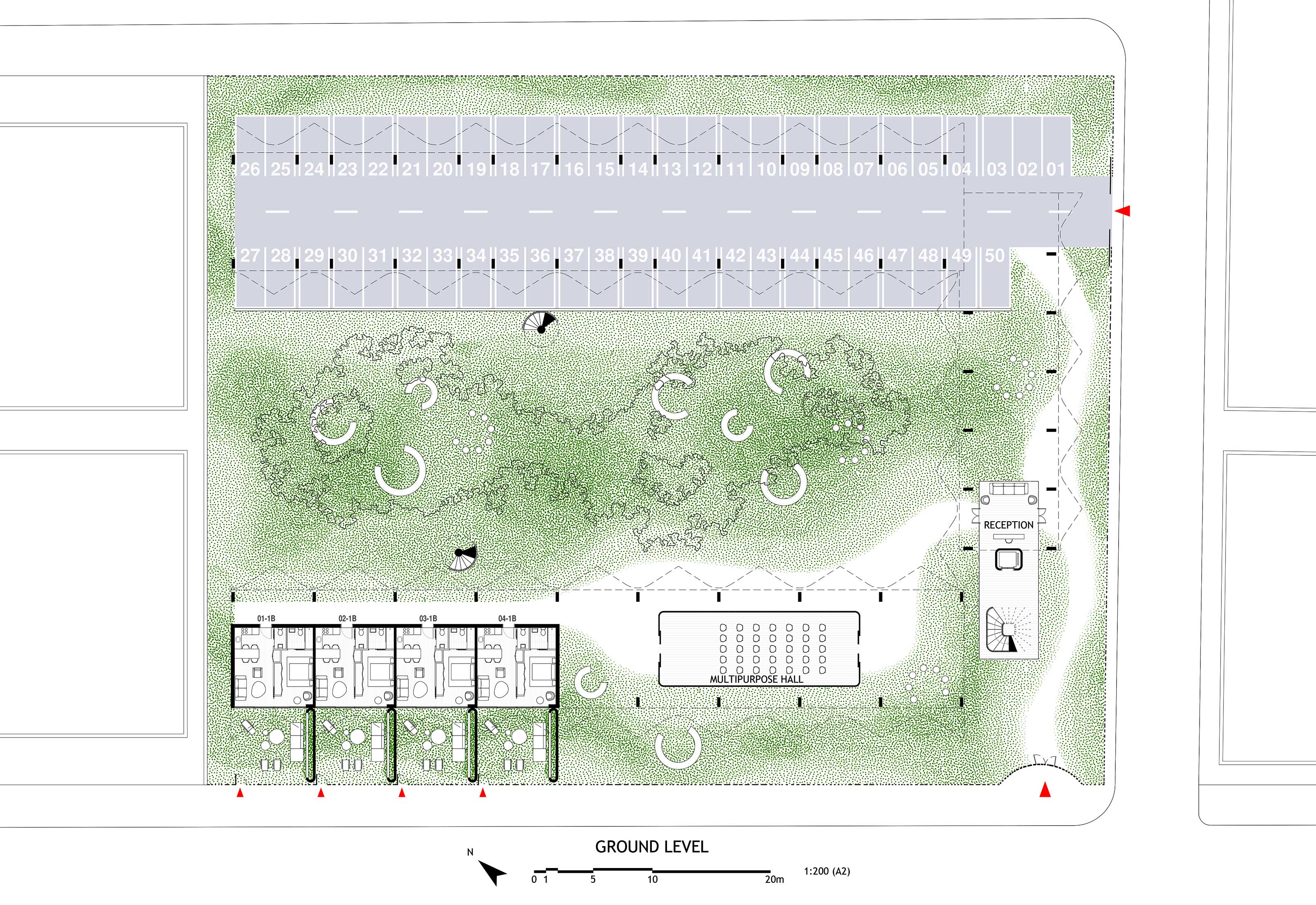 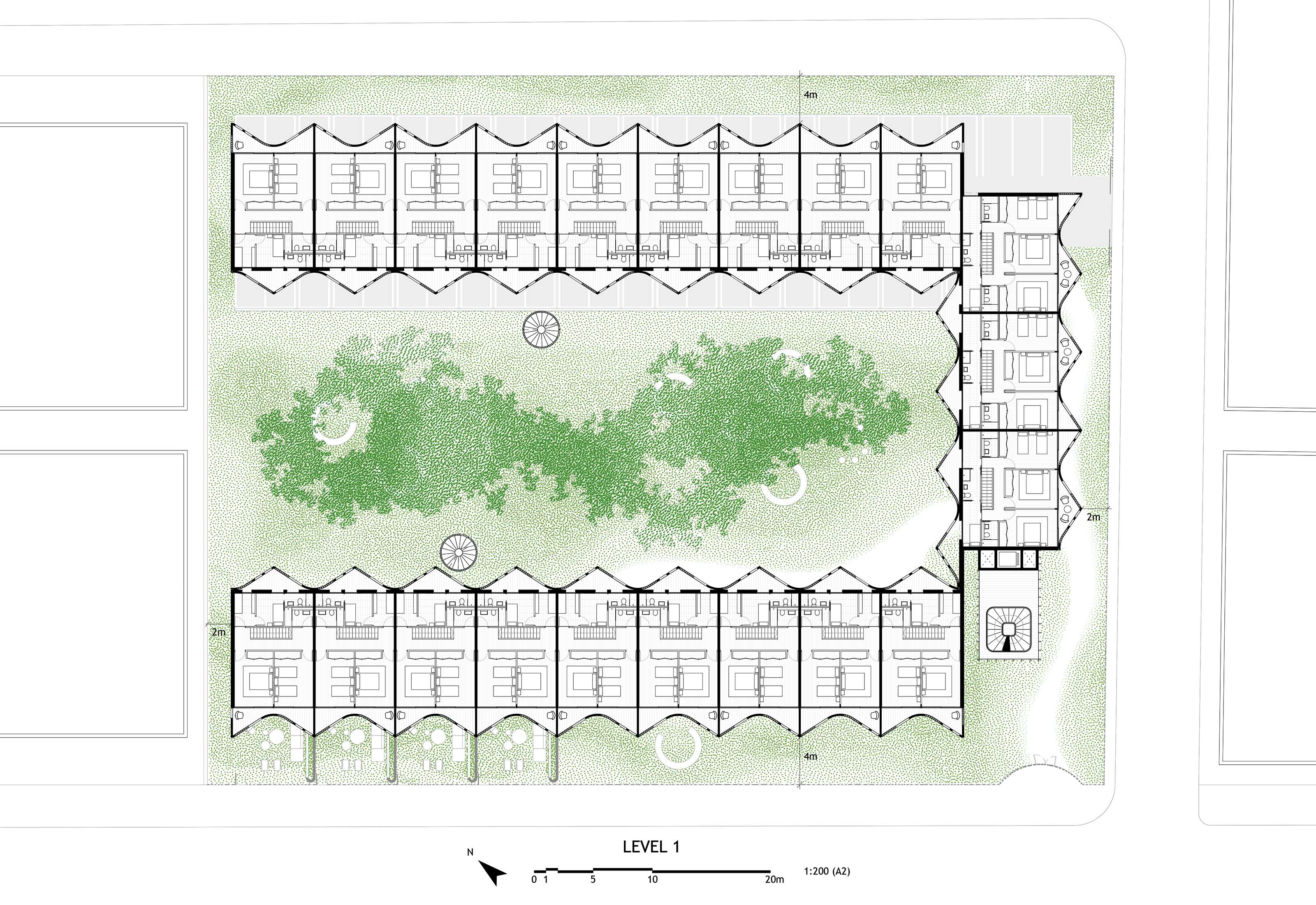 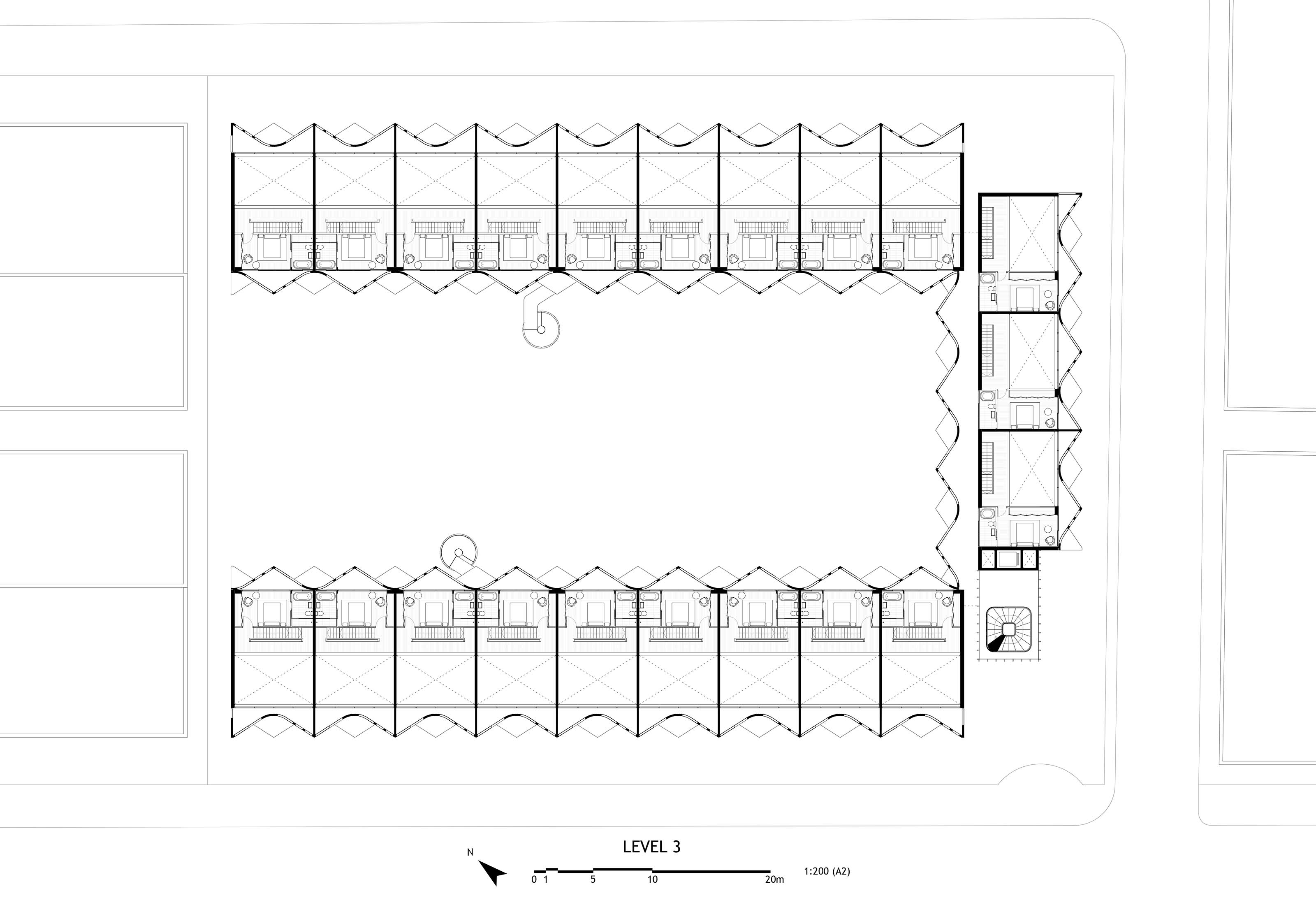 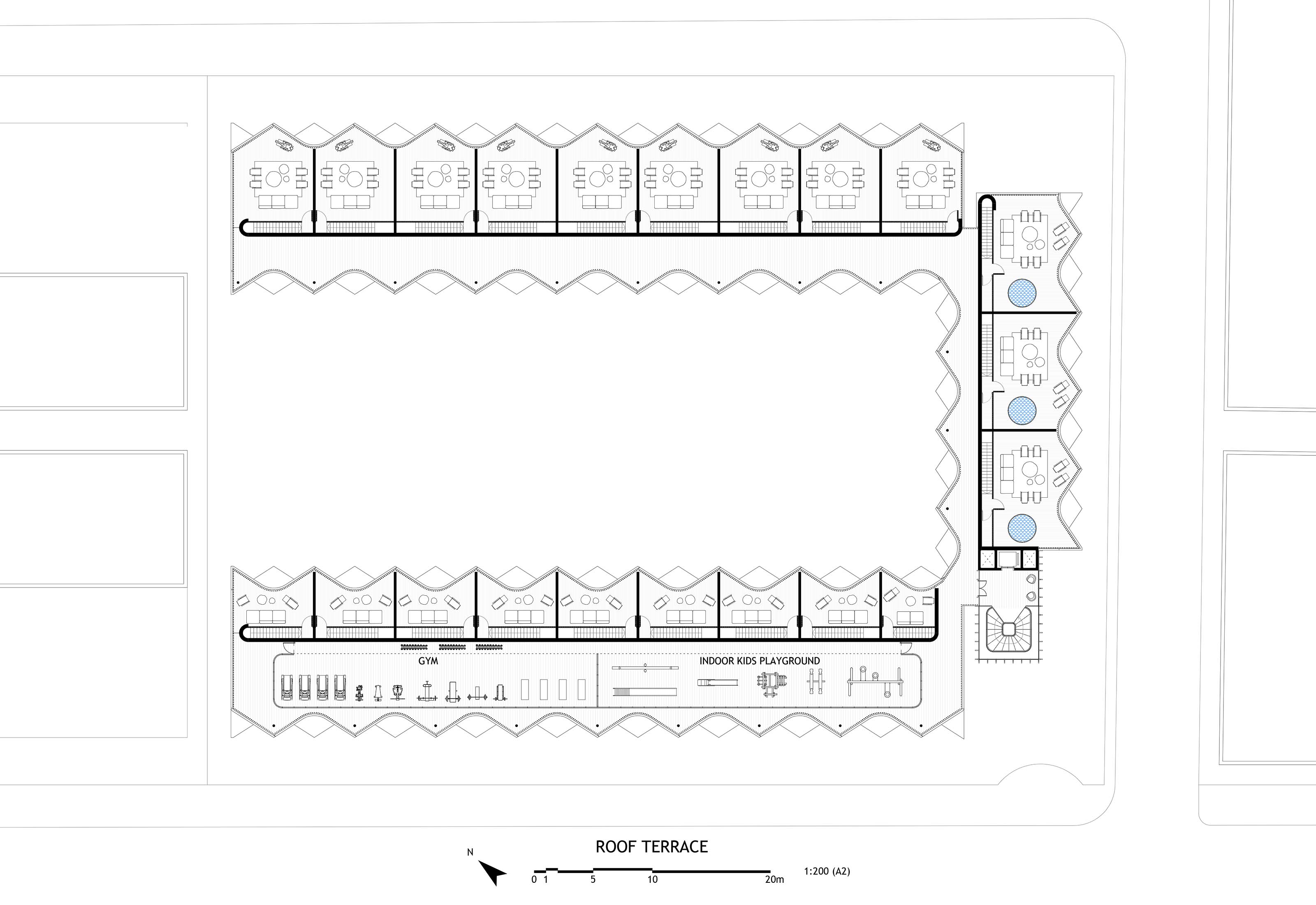 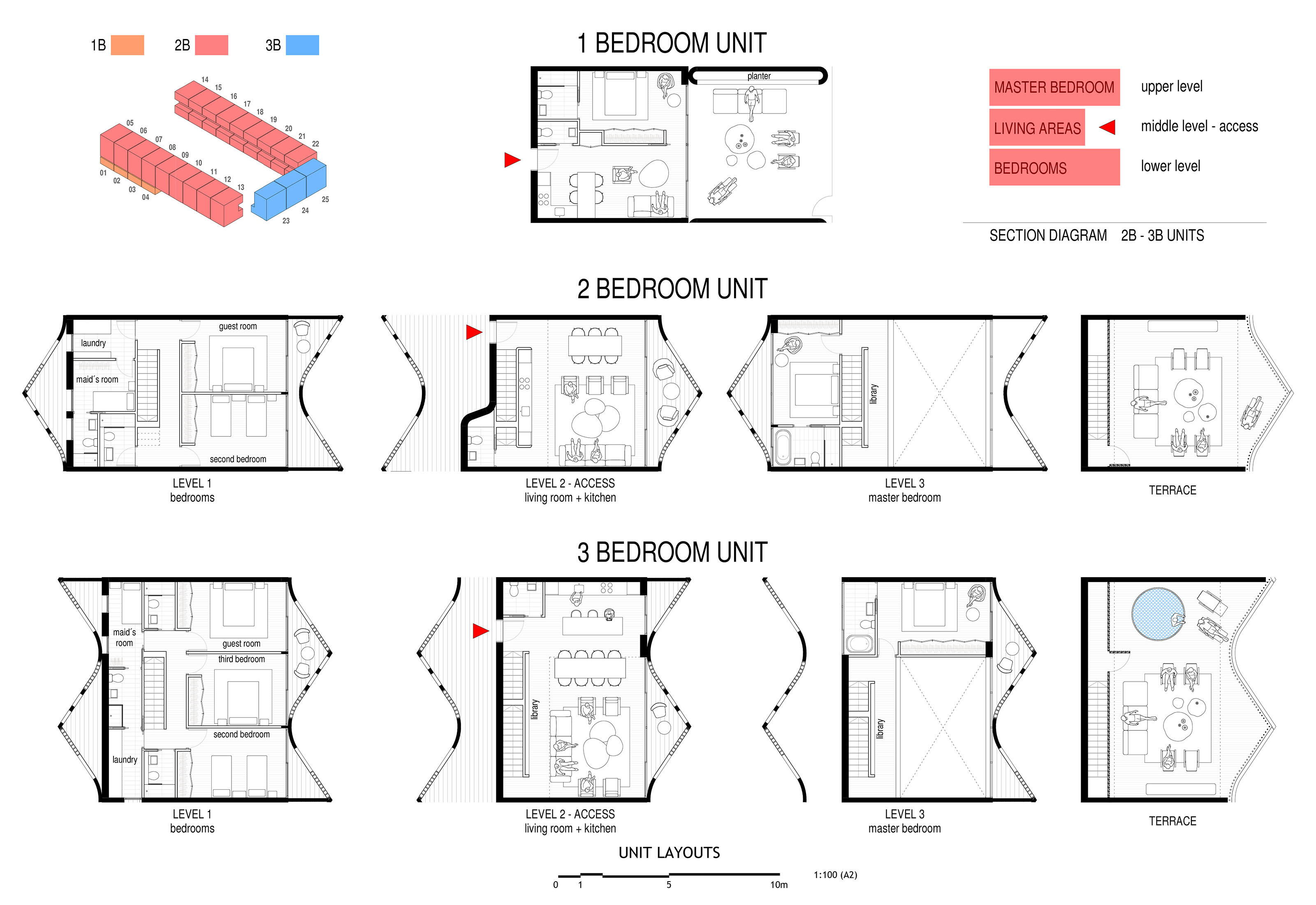 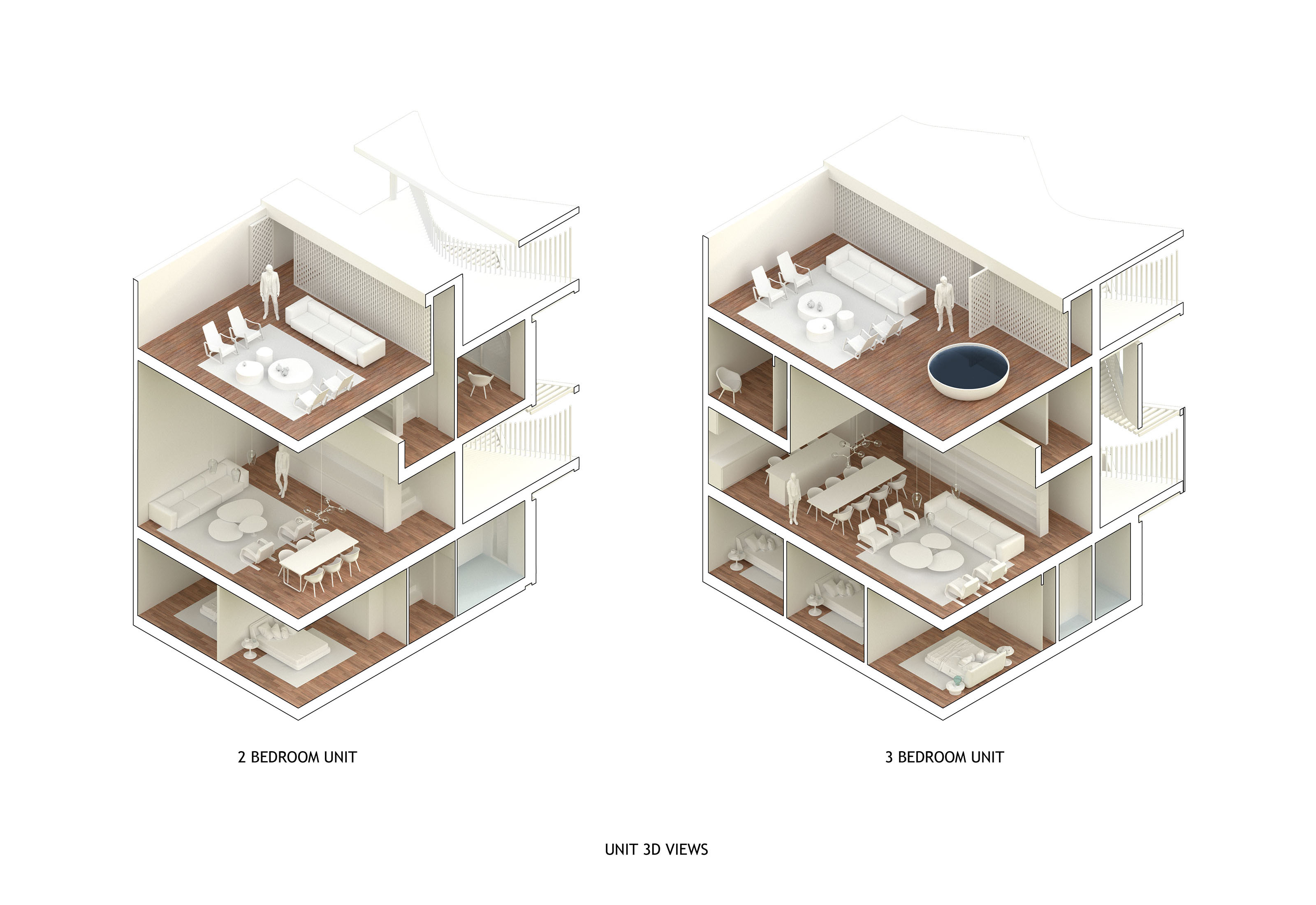