Our response is a simple volume, conceived as a freestanding monolith in the form of a truncated pyramid with a rectangular base, raised off the ground and subtly supported by two tapered cone elements that form the entry point. This results in a covered public square that allows the site to interact more actively with the urban context.

The building combines sculptural and architectural techniques, providing the city with an artistically conceived volume, composed of overlapping layers with different characteristics and functions. The passer-by will perceive the outside of the building as a superimposition of undulating floors, a structure in the form of an irregular truss with intertwined beams and a semi-translucent and textured envelope, pierced by horizontal windows.

The internal layout responds scrupulously to the program proposed in the competition guidelines, organizing each functional group on a different floor level. However, each of the levels cannot be considered a mere horizontal plane in its use, this is a different situation than the normal stacking of floor slabs one finds in other buildings. It would be more accurate to describe the design as a stacking of topographies, of undulating surfaces. These are warped slabs - sometimes only with steps (classrooms, lecture rooms, labs), other times ramps (hallways, lobbies) - that make it possible, from a functional point of view, to have sloped classrooms or stepping in the Performance Hall that improves visibility. From a formal point of view, they provide a singular and unpredictable spatial experience.

The top level is a roof terrace which is proposed as a large semi-external public space, a great undulated square similar to an auditorium. A privileged location, open to the sky and to the city, serving to exhibit the potential of the Centre as the setting for more informal musical events than those that take place in the Performance Hall, along with celebrations and cocktail parties. At other times, this space will be used as an area for rest and reflexion, and for the exchange of ideas. A place for musical creativity to emerge outside of the classroom.

Added to the external formal and internal spatial richness is a lighting and pictorial design where each floor level is assigned a different colour tone, which will emphasize the aforementioned internal and external characteristics. We can imagine how this strategy will convert the building into a great attraction for the area during the hours of darkness, becoming a true object of contemplation during winter snowfalls, when this artistic composition will float on a white coating of snow.

Without a doubt, we propose a counterpoint to the neighbouring buildings, a series of singular and inspirational experiences that connect the architecture to the creative purpose for which the building is designed.

The structure is composed of intertwined beams that act like a giant truss. It is supported on the two tapered cones of the ground floor, made from concrete. The floor slabs-topographies are supported along their perimeter on the truss and on the lift-stair core. The skin of the facade is semi-translucent and texturized glass that allows for partial visual transparency, while at the same time contrasting with the open area of horizontal windows. 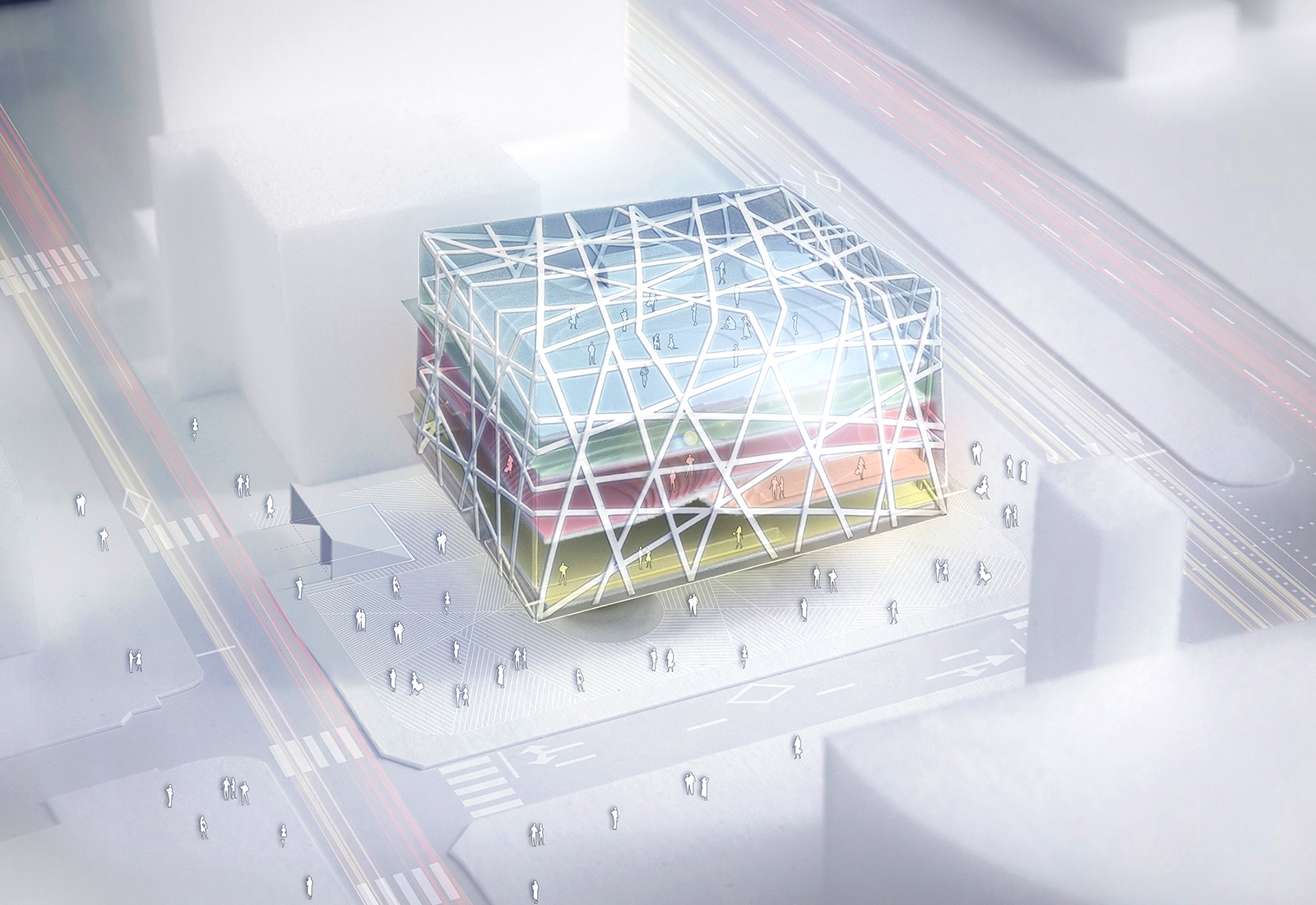 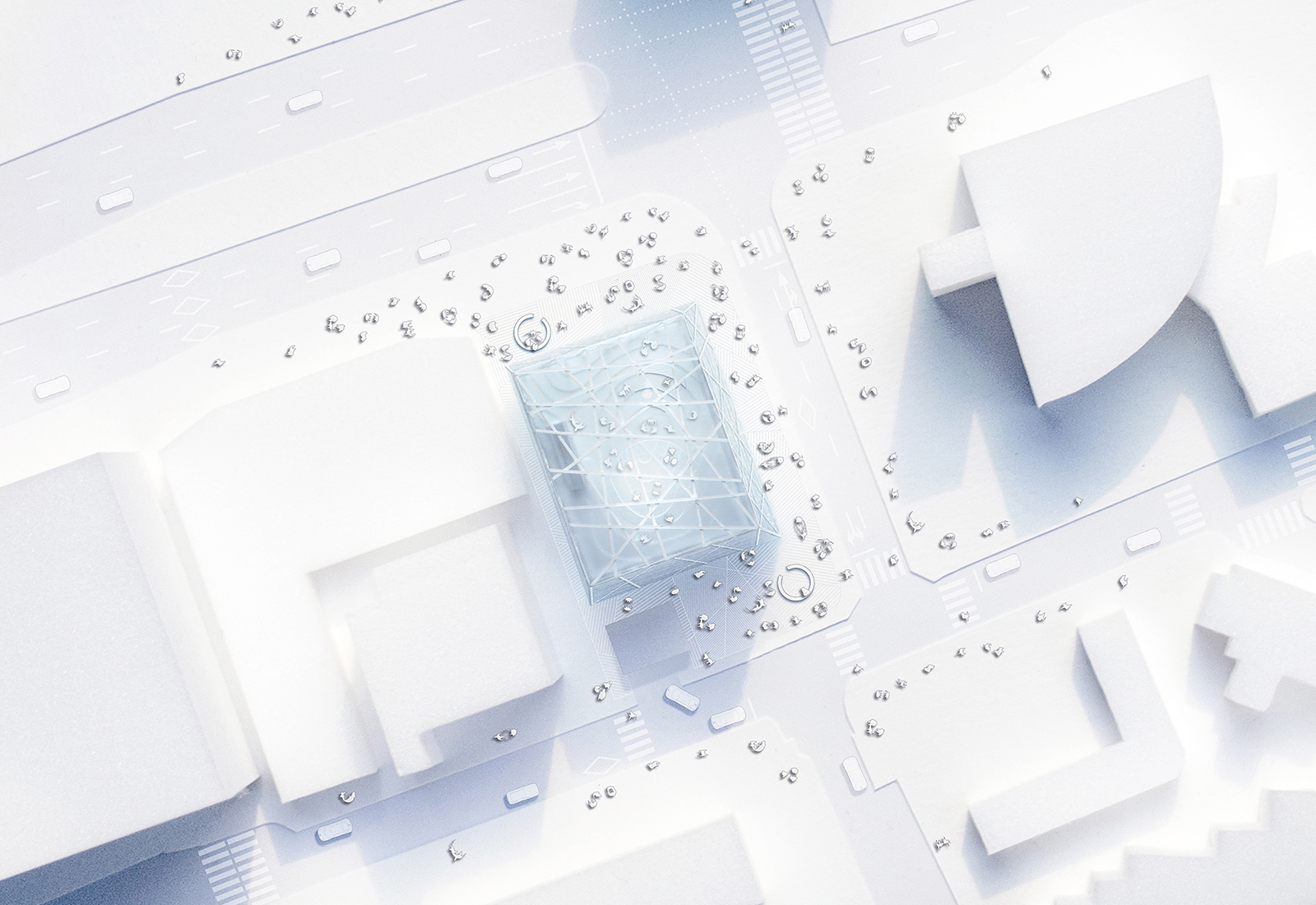 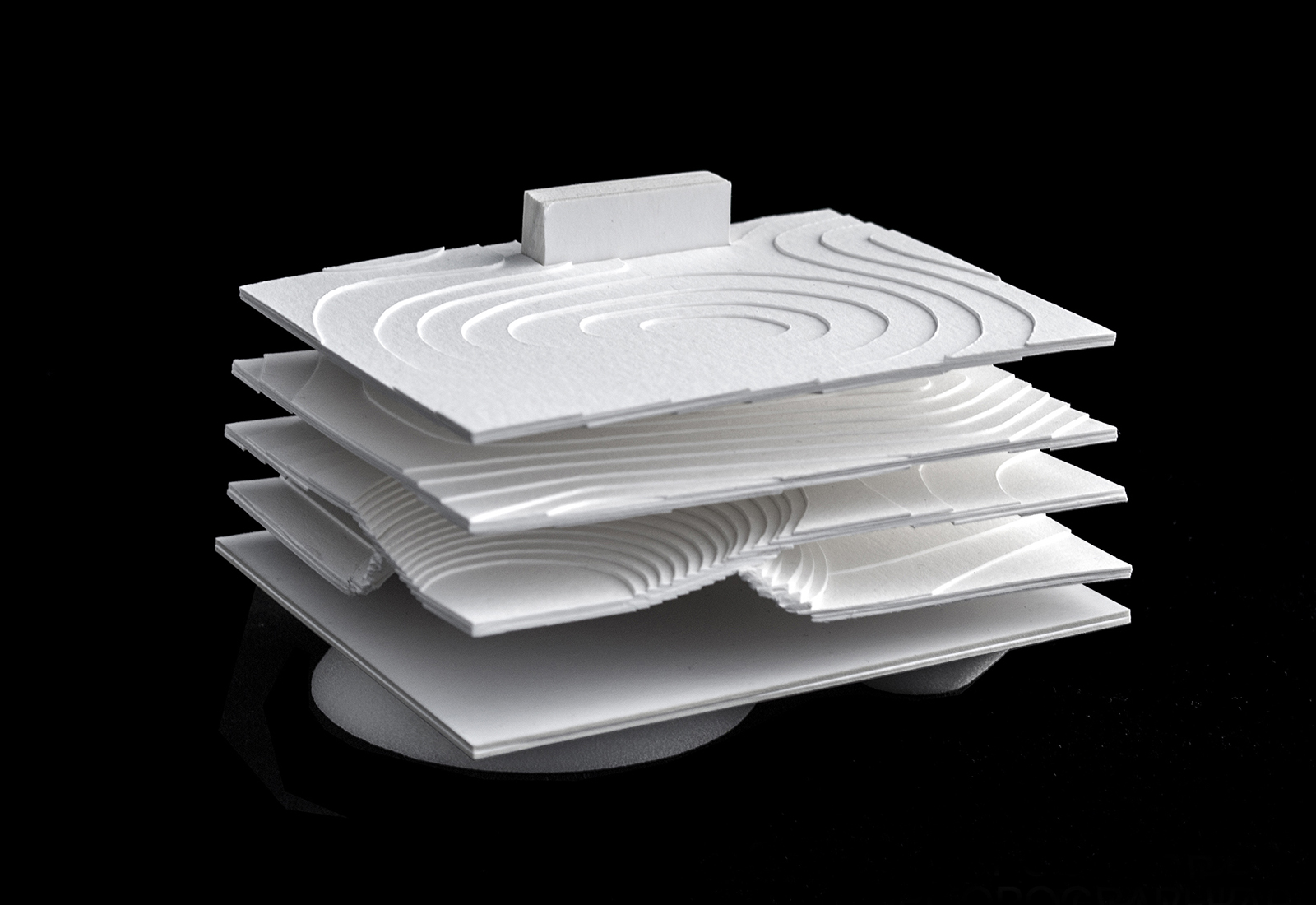 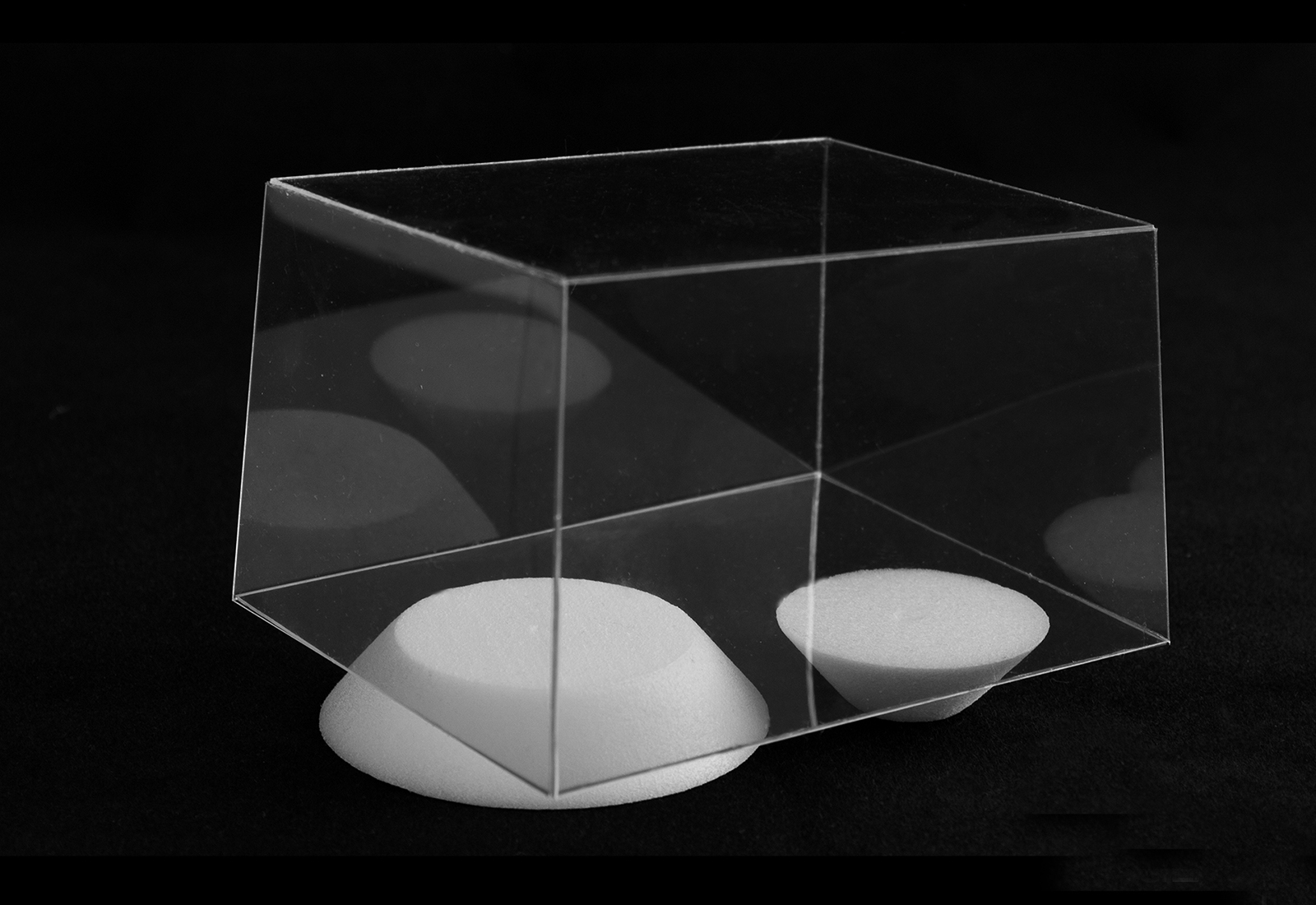 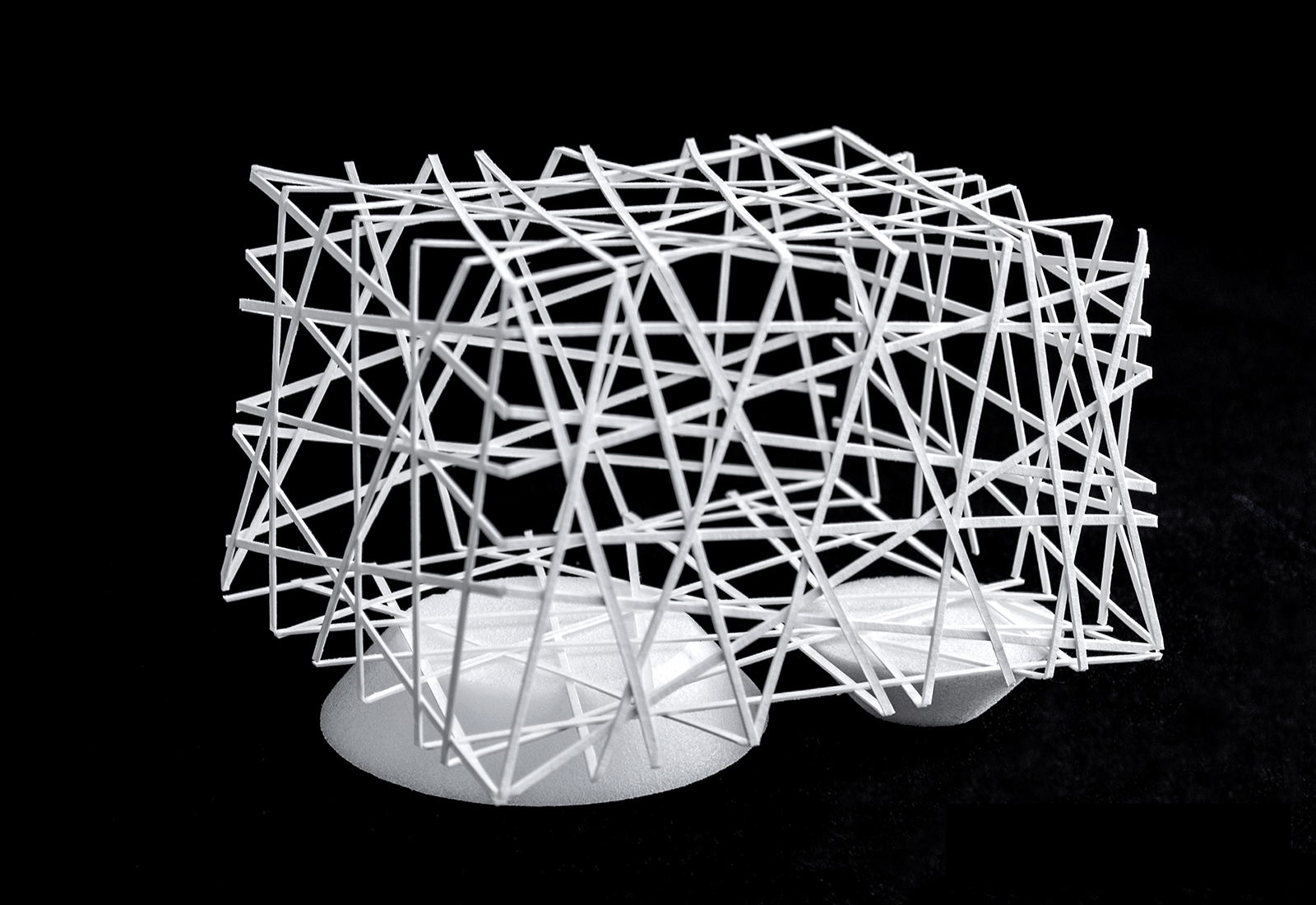 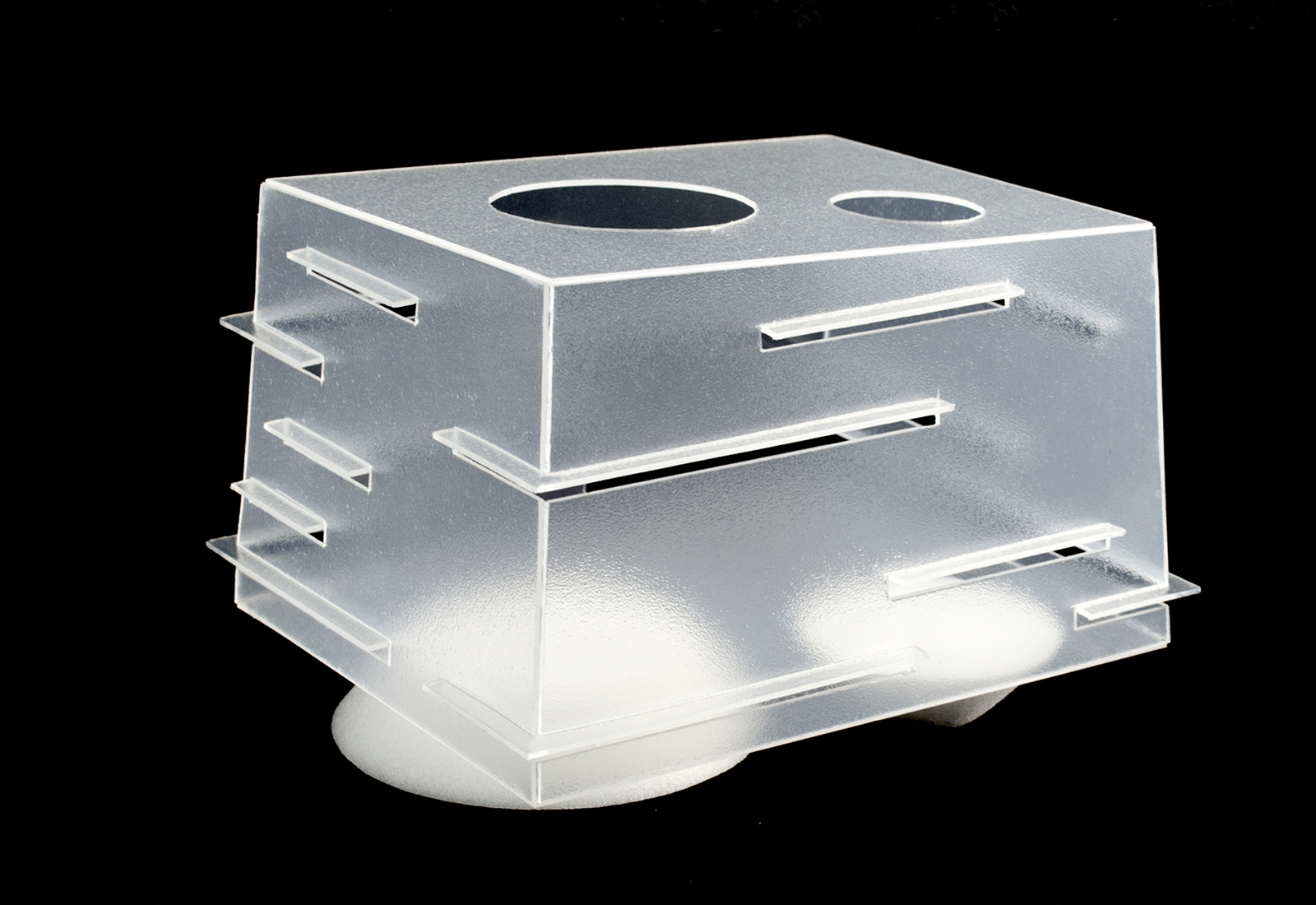 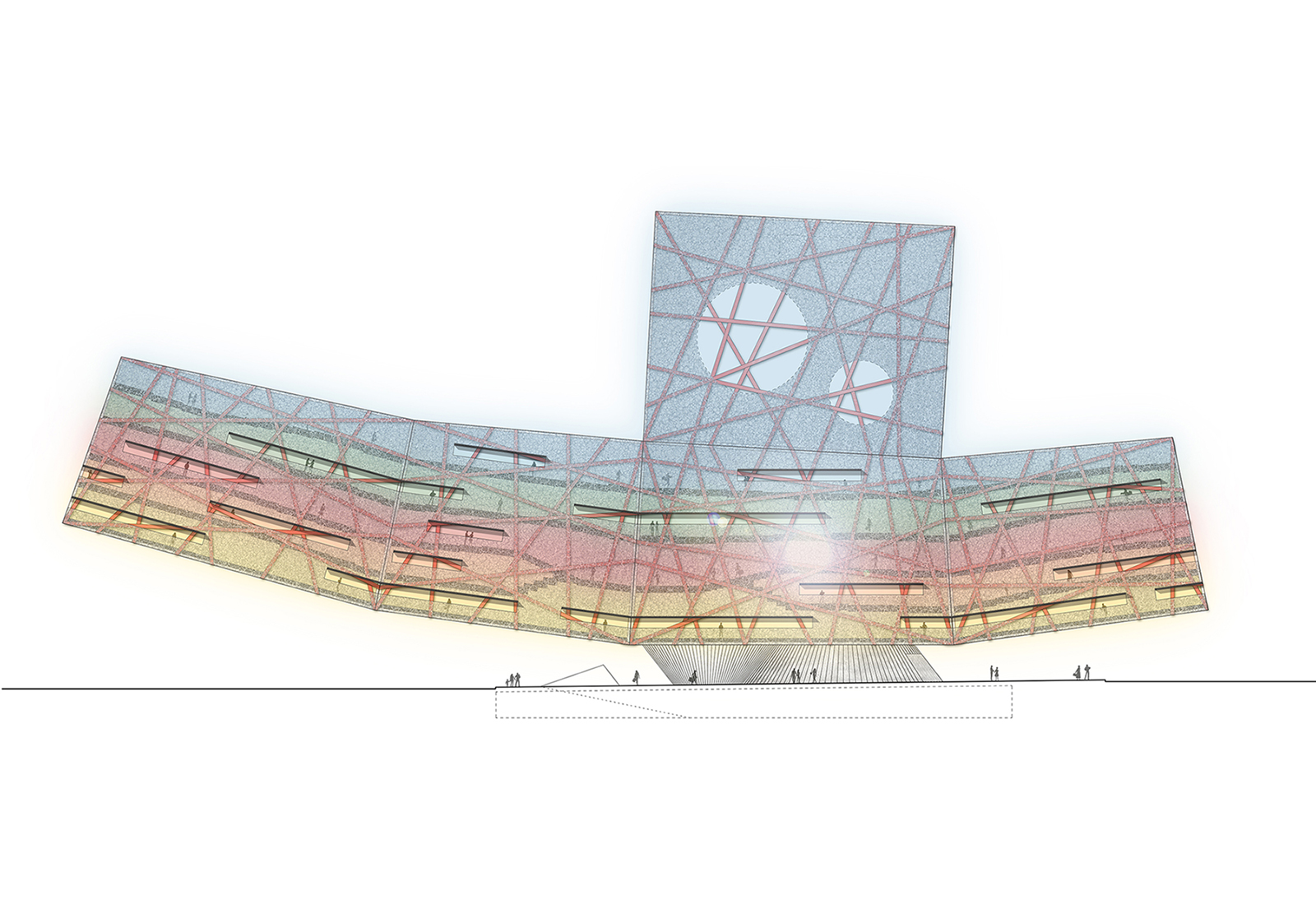 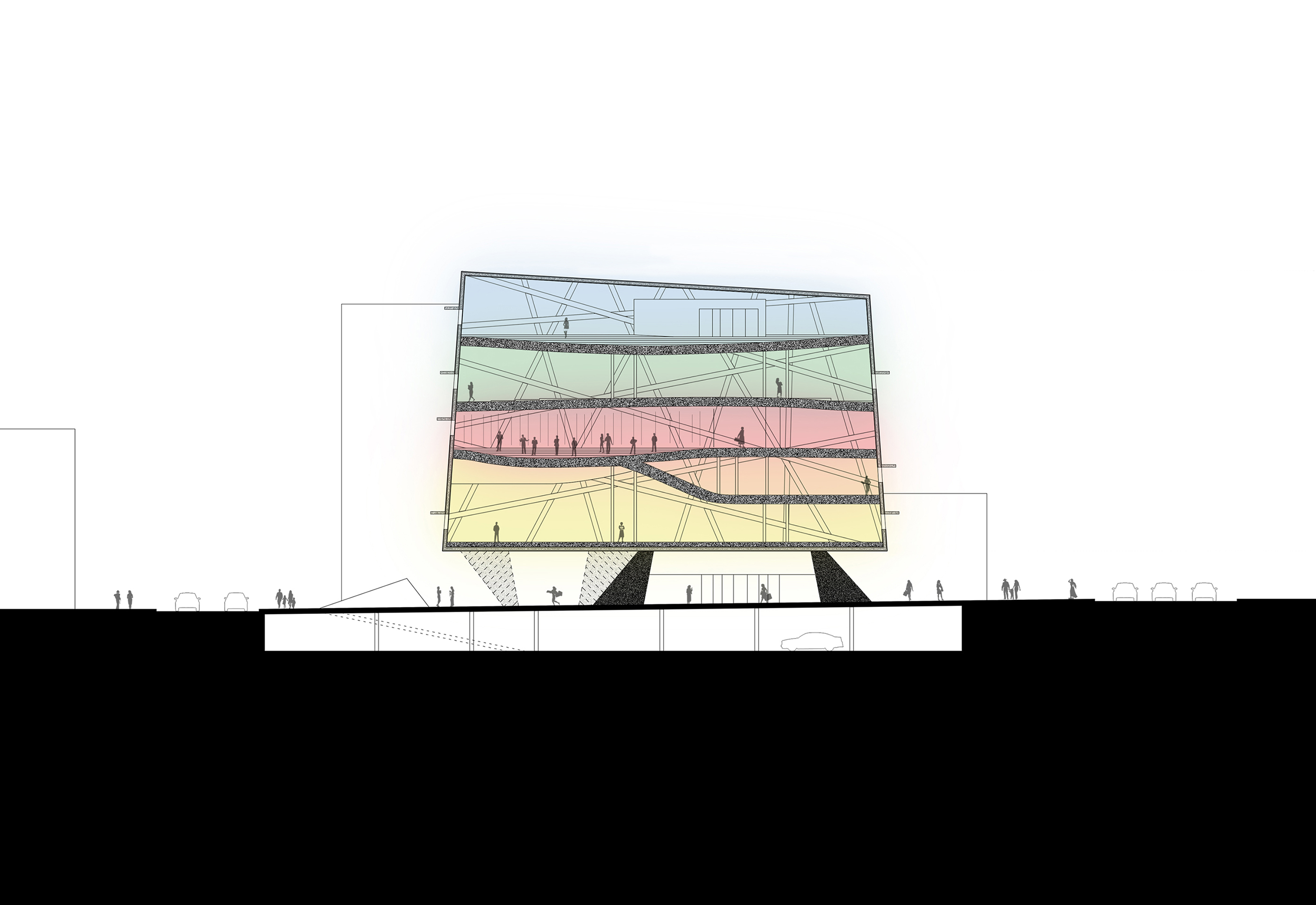 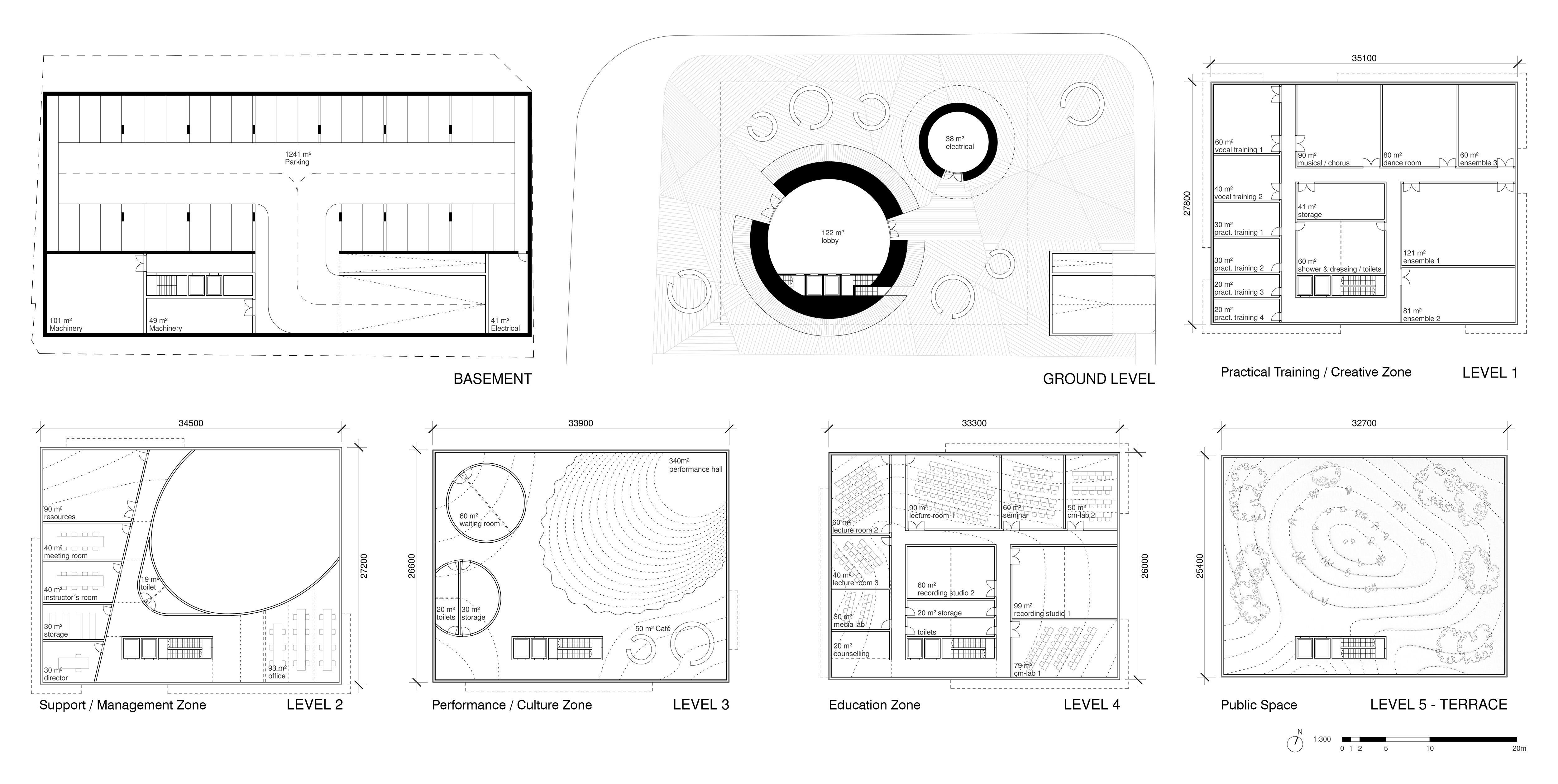 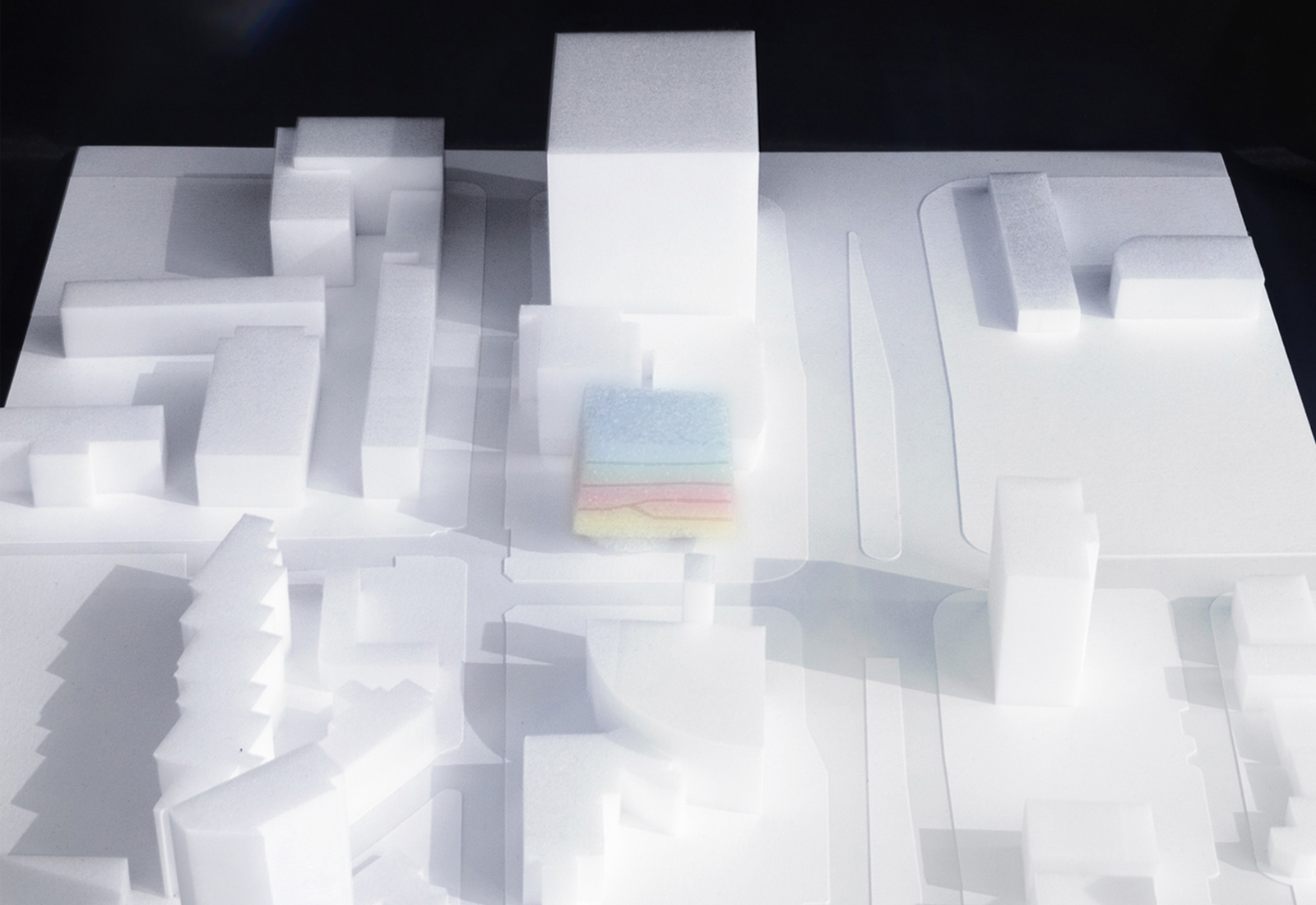 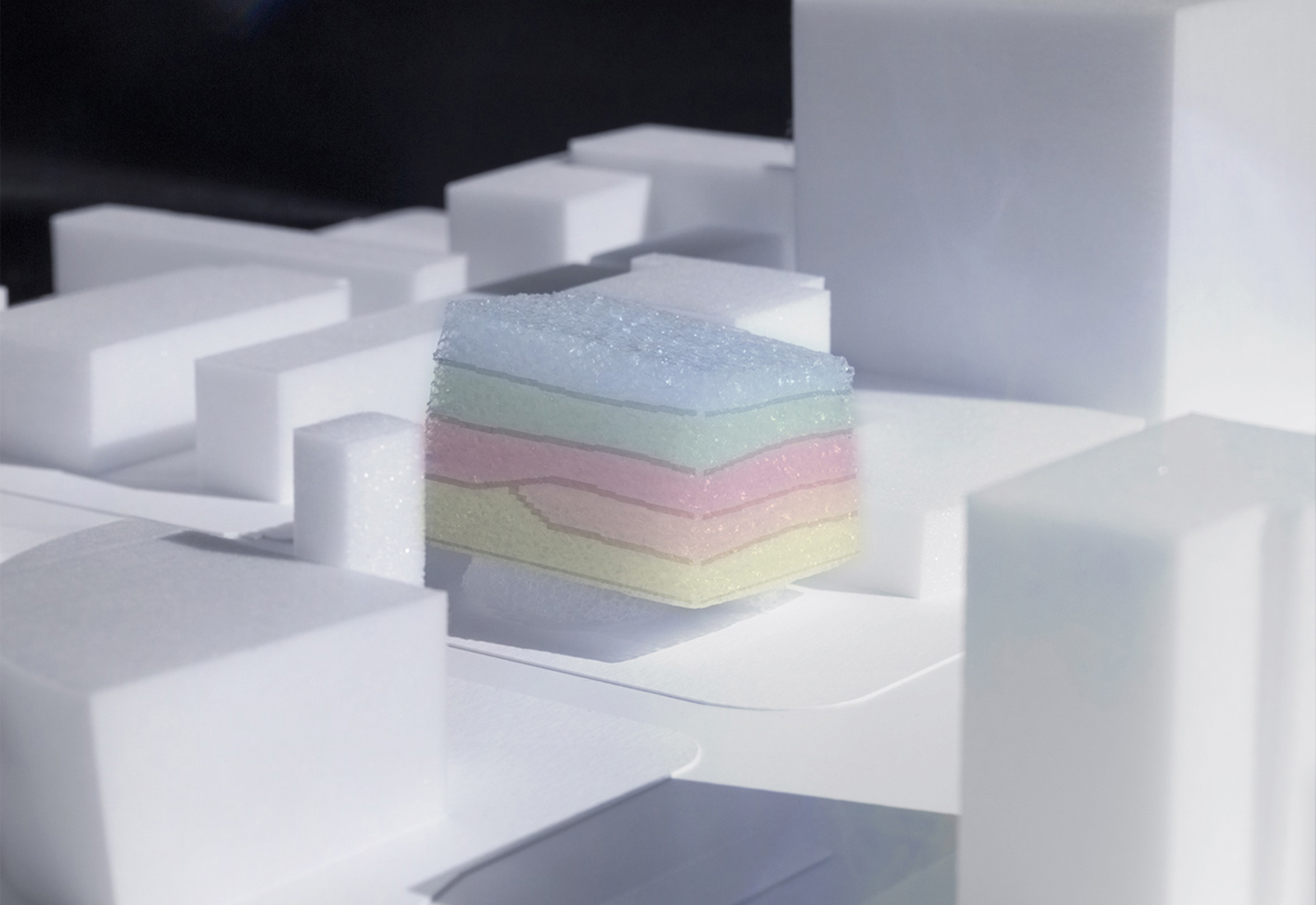 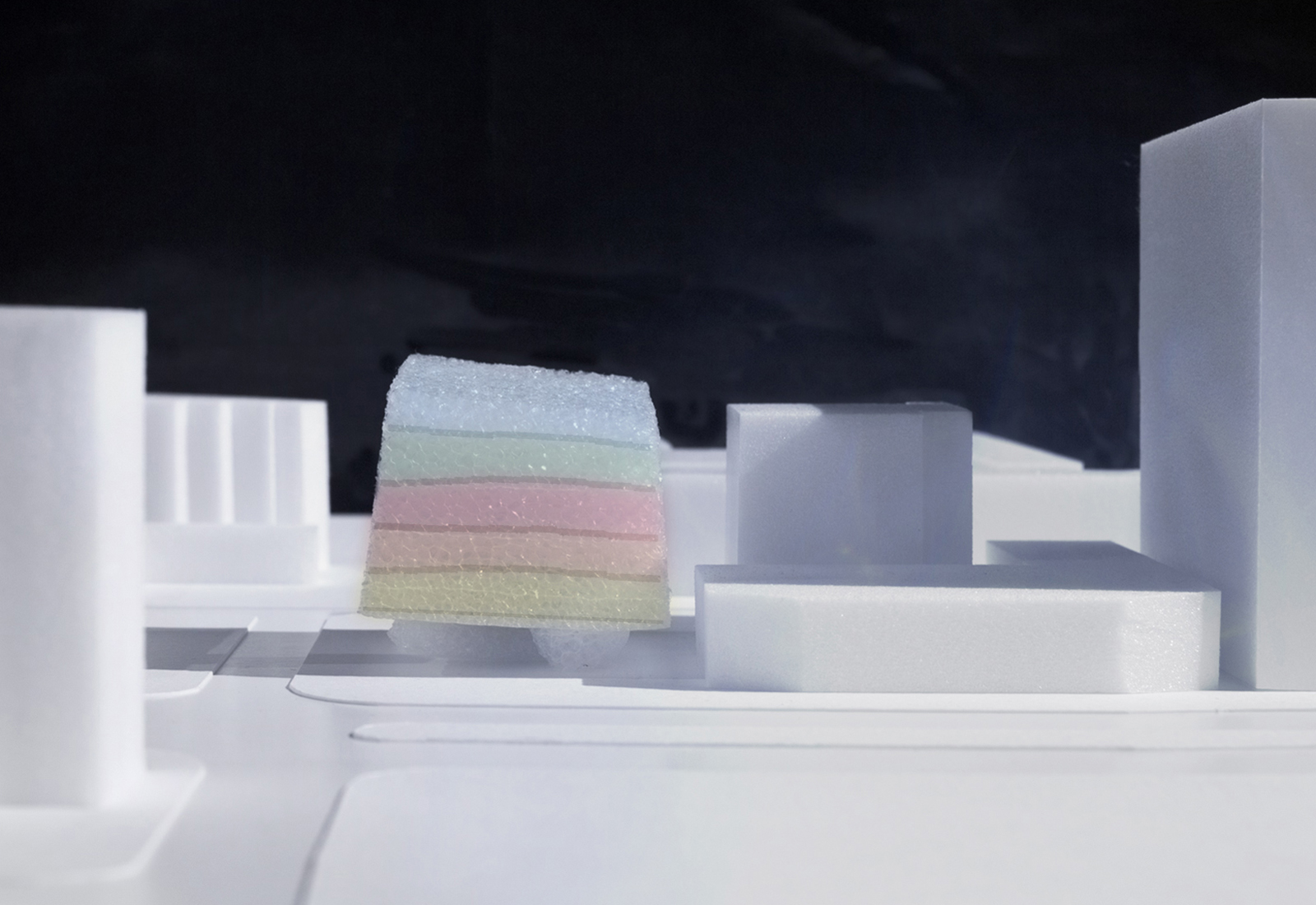