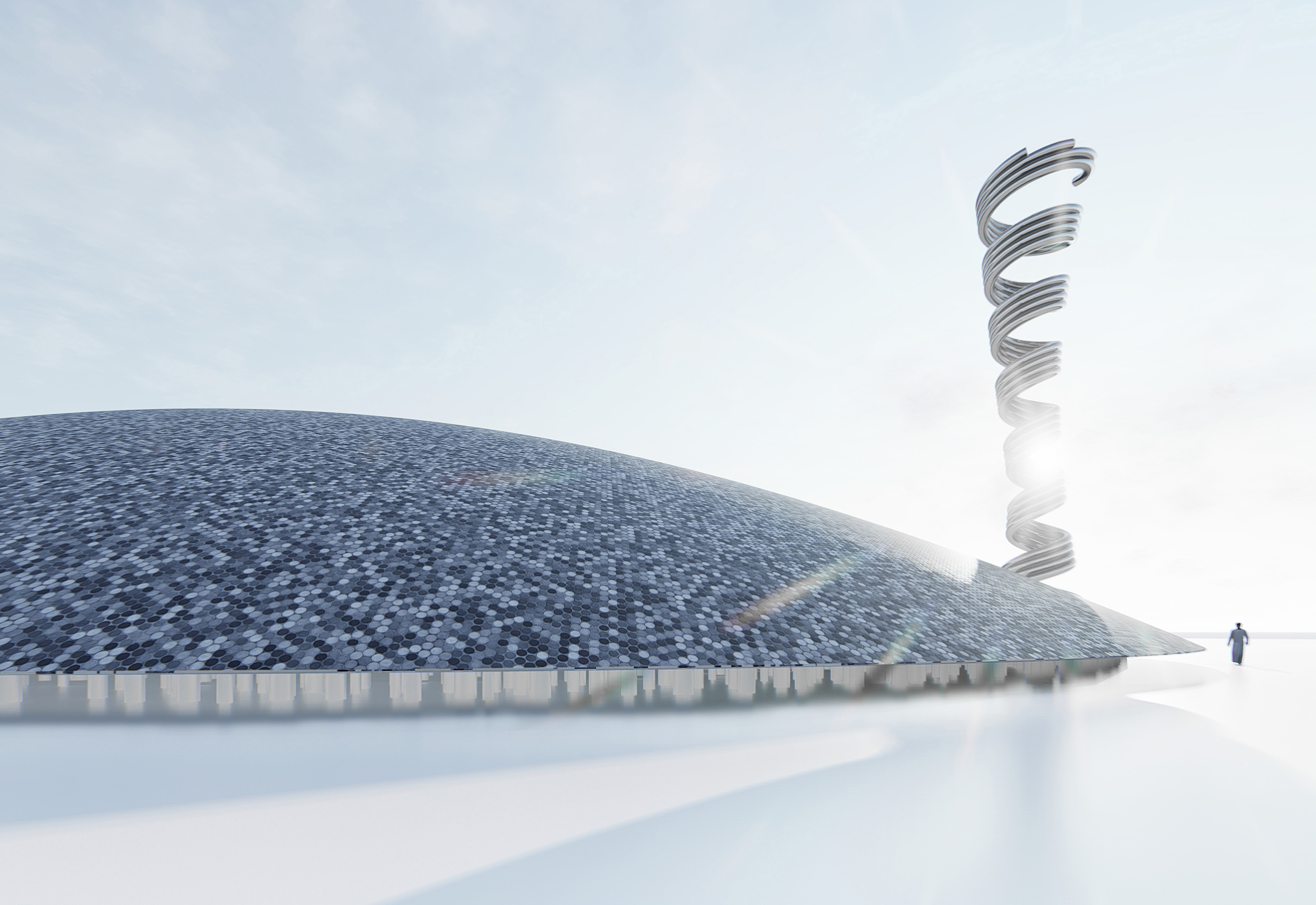 Our aim is for the mosque to announce its presence using an arrangement with great strength and simplicity, which is achieved by an elliptical dome that rises 20 m in height. Its formal clarity and forcefulness contrast with the mosaic of forms and materials that comprise Dubai Creek Harbour. By using this geometric simplification, instead of formal complexity and fragmentation, we believe that the iconic nature sought after in the rules of the competition will be more faithfully achieved. The complex is completed with an element that acts as a formal counterpoint to the dome, a 40 m high minaret designed as an abstract sculpture and landmark.

The dome floats some 80 cm above the ground plane, providing a sense of semi-interrupted continuity between the interior and exterior, which, on the one hand, allows the visitor to subtly sense what is happening inside, but also provides a sense of protection, of the enclosure of the sacred place.

Access takes place through vaults with a variable section that cut the great dome. Once inside, the worshipper will find himself inside a large forest, a massive group of trunks acting as columns, which anchor the dome that provides shelter from the harsh desert sun.

Before us is a typological variation of the hypostyle halls that are so common in traditional religious Muslim architecture, such as the Mosque of Cordoba or the Mosque of Samarra. But in this case the density of the number of columns is much greater and their organization is completely organic, with no sign of the normal pattern that defines them. The sensation of the visitor will be akin to walking among the trunks of a large group of trees.

The prayer halls - both for men and women - are completely free of columns, as if they were clearings in a forest. Both with an elliptical form, they are stepped in a slope descending towards the mihrab, which is located at the lowest level of each hall. The mihrab is formalized through a light beam that penetrates through an opening in the dome. The special characteristic of this opening is that it uses a system of reflections achieved by means of parabolic mirrors. These are placed in said lightwell and divert the light from the sun so that it permanently points towards the mihrab, regardless of the time of day, or day of the year.

The variable density of this large grouping of columns is used as a physical and even visual barrier by placing groups of columns in clear proximity. In this way, without the need for partitions, doors, etc., the entrance and exit areas are established for each of the prayer halls, while at the same time ensuring the privacy of one prayer hall from the other. The spaces are defined, but without a sense of compartmentation, the spatial continuity is never lost.

The spaces that are not used for prayer, ablution areas, toilets, library, Iman and Muathen quarters, etc., are placed within two cylindrical forms, separating them in this way from the prayer halls. These cylinders also provide structural support for the lateral forces that the dome is subject to and that the columns are unable to counter because of their lack of rigidity.

A circular staircase provides access to the roof area dedicated to prayer. This area is defined by series of stepped spaces over the curve of the dome.