The National Museum of World Writing will be located in Songdo, South West Seoul, a city built on reclaimed land. The Museum will become part of the composite cultural space in Central Park, which is surrounded by an urban fabric composed of various tower blocks containing offices and apartments. This led us to the conclusion that the museum should demonstrate this uniqueness in its form and, therefore, be conceived as a formal exercise, in complete contrast to its surroundings of repetitive and monotonous tower blocks. The ultimate goal was to respond to the aim of creating a visual landmark and point of social attraction within this homogenous urban structure.

We conceive the Museum as a refined and elegant set of volumes placed in the park. The principal geometry is a sinuous curve which winds around the park floating over a glass podium. It is complemented by three other main elements of a different nature: the rotunda, the tower and the star-shaped central space. To these, we should add the three internal courtyards, created by the empty space enclosed by the other volumes. The articulation of the curve with the tower establishes the most powerful relationship of the composition, seeking a formal contrast and a tension that makes these elements inseparable.

As previously stated, the principal geometrically sinuous volume floats over the ground floor, which is left completely open to its surroundings, blurring its boundaries. This is where the internal courtyards play their part, ensuring the permeability and visual transparency of the ground floor. The space at pedestrian level flows without the building becoming a visual obstacle. Here we see the second main formal contrast of the design, the relationship between a solid volume, of heavy appearance, which sits above a light and glassy one. Visitors will be led on the ground floor through spaces so narrow that they will experience the contradictory sensation of an internal space in levels of comfort and enclosure, but that will inevitably also feel external due to the translucent nature of the perimeter.

As we have explained, the building's volumes do not act merely as containers of functions, we have also considered their formal, typological and symbolic relationship, as well as the spatial routes.

The permanent collection is displayed on a route running the length of rooms of various types, scales, and forms. A “promenade architecturale”. From the ground floor lobby we ascend using the stairs to the first floor, where the sequence of exhibits begins. The first two rooms (World Writings and Origin & Development) take the form of two galleries in the sense that the word has of a lengthwise route –in the same way as the long hall of the Uffizi Museum or the Grande Galerie of the Louvre. A typology found in many historic buildings that were converted into museums. In this way we recover the potential of this typology of display space, rarely used from modernity to current times and frequently replaced by cubic enclosures, at times without any attributes beyond being functional enough to contain artwork. This typology allows us to work with the concept of a continuous route, to experiment with momentary views along a sinuous path, to include brief views to the outside along the route, or to create undulations in the floor, which becomes a place to sit and observe a piece of special relevance that should be highlighted. Attached volumes appear along the length of the route, elements that allow for display areas in separate smaller rooms, for video or audio displays. They are an example of the power of this strategy to accommodate the needs of a brief that we understand will become further defined after the competition.

We reach the third room (Characters into Art), a complete counterpoint, which leads the visitor to an opposite pole, the static nature of a large circular room. A 22 m diameter space washed by concealed natural lighting along its perimeter. The room is able to be temporarily divided based on the needs of the program, as is suggested in the plan drawing.

Taking an elevator we descend to the first basement reaching rooms four and five (Writing´s role in culture and society, and Writing and Recording), where we once again return to the concept of the lengthwise route, in this way again establishing a contrasting experience for the visitor.

We return to the ground floor in order to access the final room, number six (Creation with Characters). It is the climax of the exhibition, once again with a different geometry that allows for additional display options, a shell in the shape of a tower.

Descending to the second basement, we reach the Special Exhibit room. Because of its multifunctional requirements we have opted in this case for a circular enclosure whose characteristics are its monumental scale –40 m in diameter and 8 meters in height– in a clear reference to the scale and flexibility of the Turbine Hall of the Tate Modern in London. It can be subdivided if necessary, as can be observed in the plan drawing. 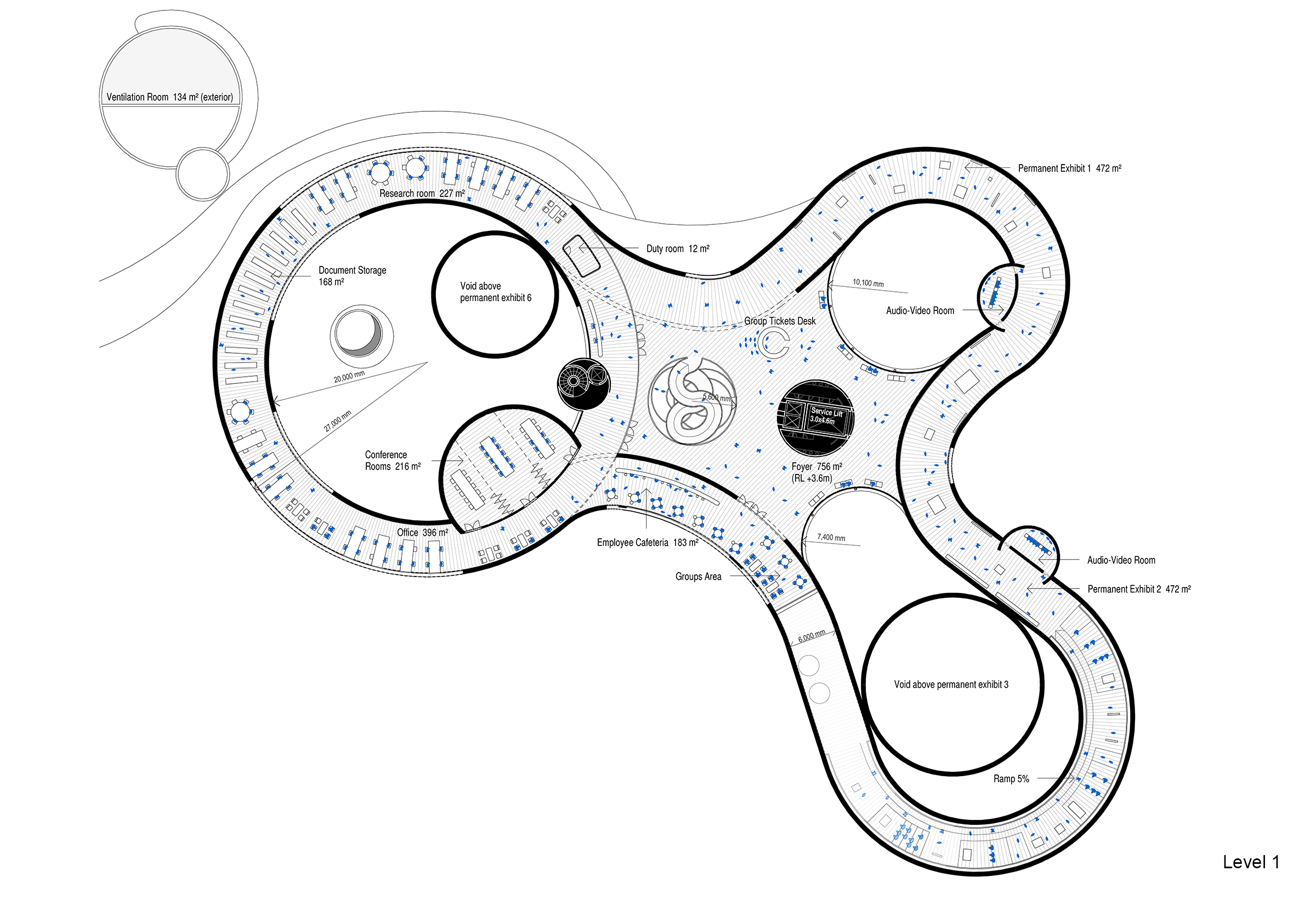 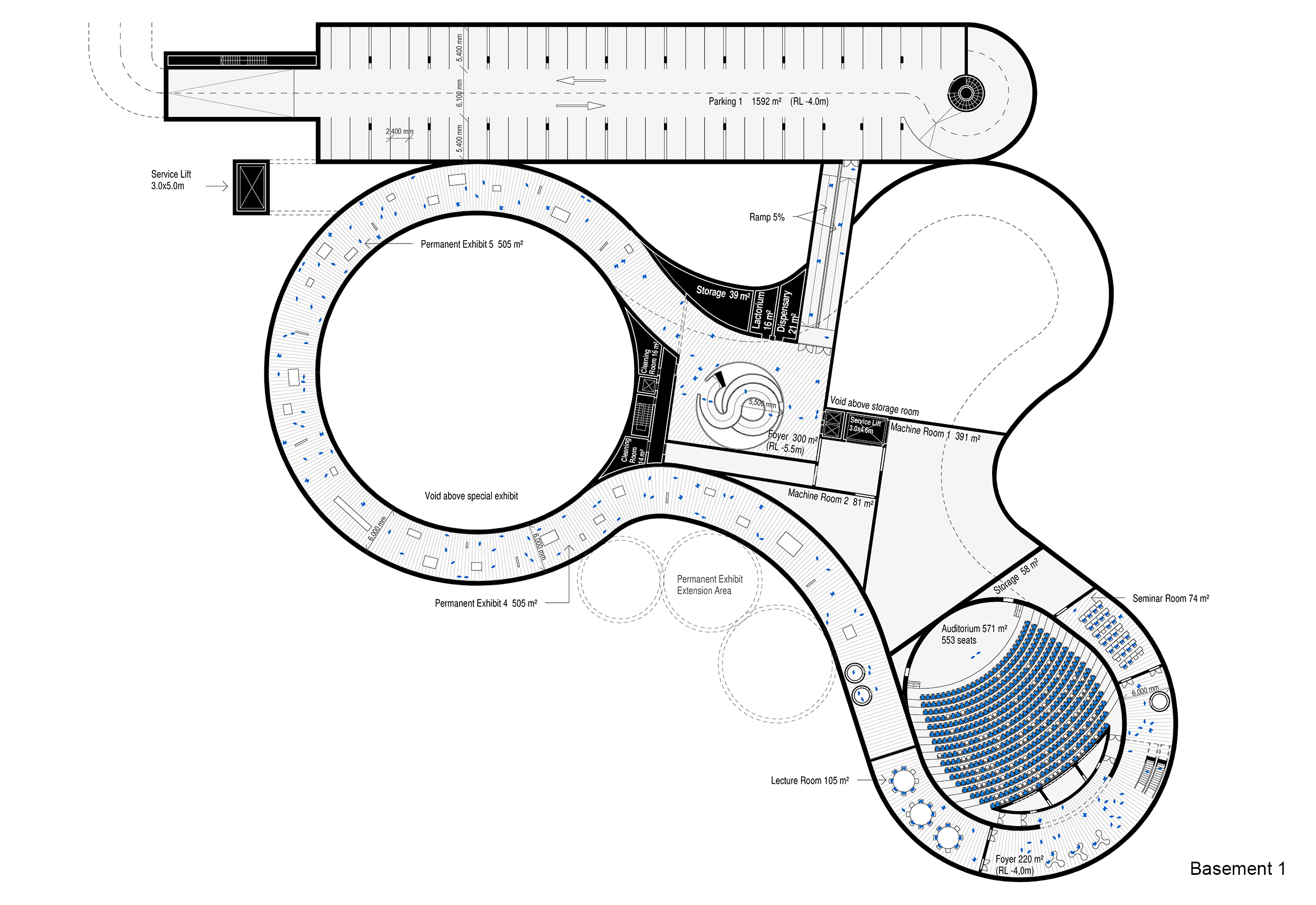 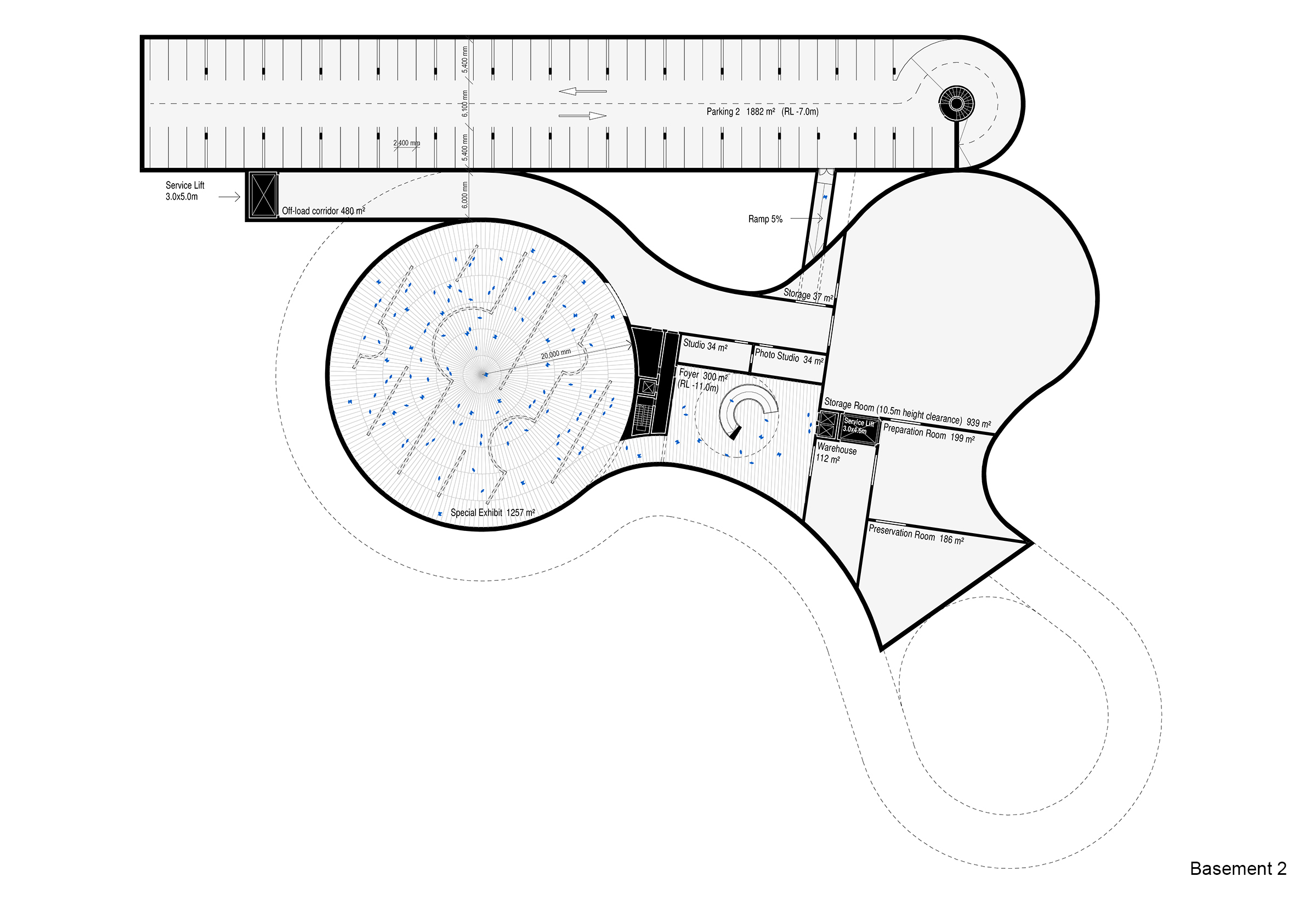 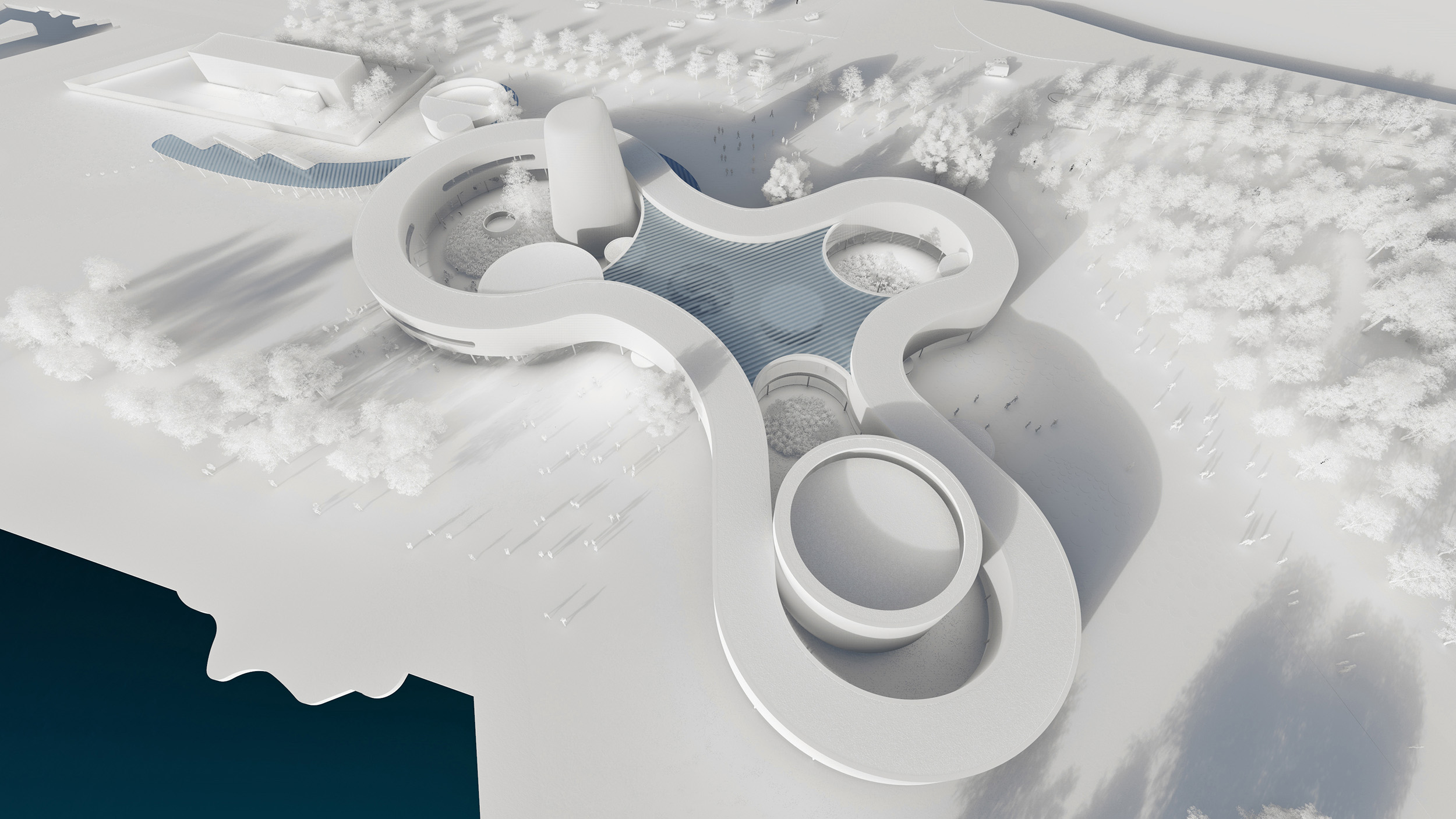