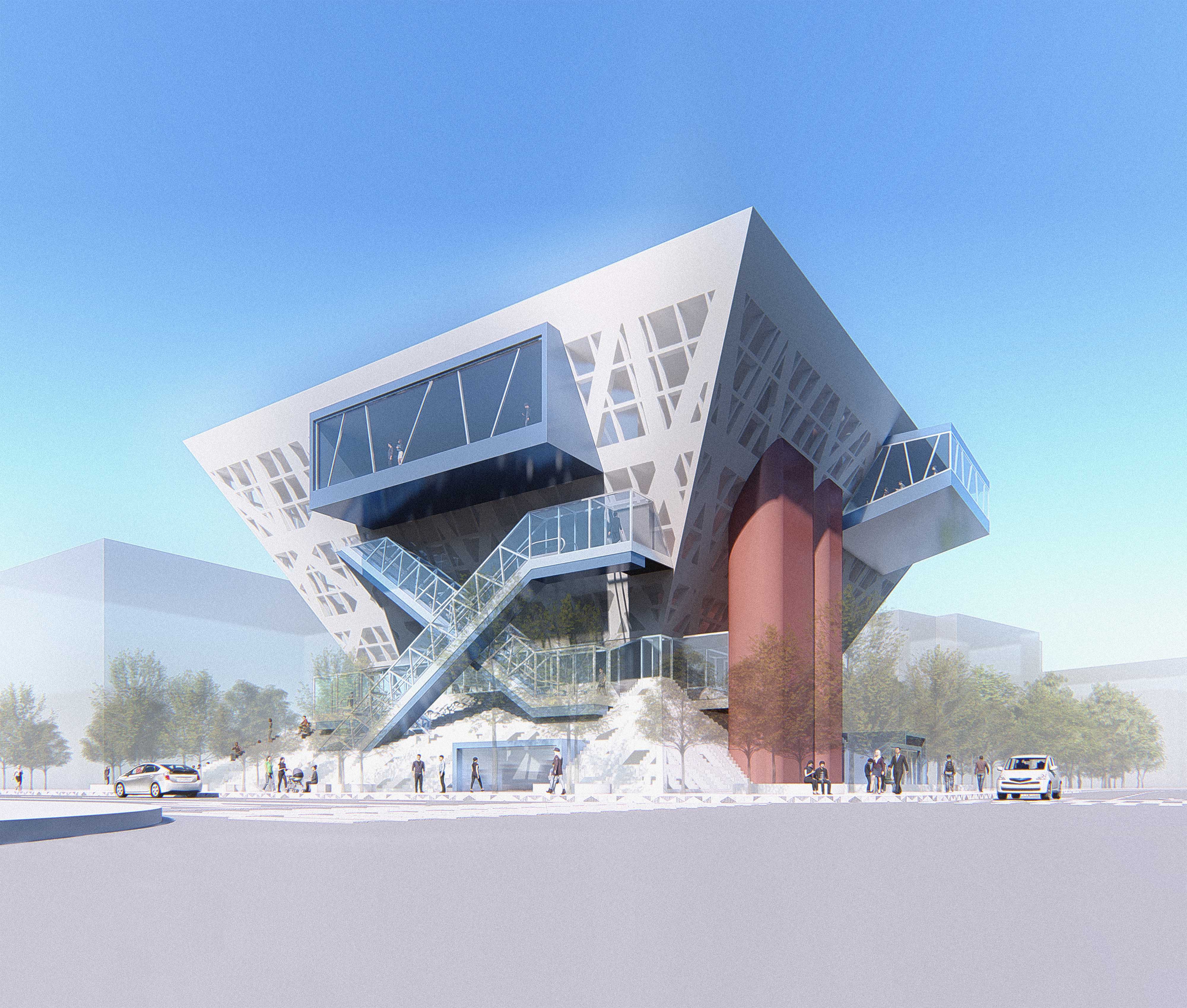 The museum's form is based on two truncated pyramid volumes, one placed on top of the other, and separated by a transparent band that encloses the Special Exhibition Room.

The building combines sculptural and architectural techniques, providing the city with an artistically conceived volume, composed of overlapping layers with different characteristics and functions. The passer-by will perceive the outside of the building as a superimposition of undulating floors, a structure in the form of an irregular truss with intertwined beams and a semi-translucent and textured envelope, pierced by horizontal windows.

The exhibition program is located in the center of the building, in a series of stacked 24 m x 24 m boxes over four levels. The Special Exhibition Room takes on a special prominence, responding in this way to the importance that it is given in the design guidelines. It is the nexus of the connection between the two truncated pyramid volumes and it is located at the building's center of gravity. The transparent band acts as a large continuous perimeter window that defines a hall. The variety of possibilities and opportunities is truly rich, offering at the same time a unique experience for the visitor.

In contrast to the majority of museums where the circulation routes are hidden and concealed in the center of the building, here they are pushed to the external perimeter, giving them an unexpected prominence. Of special interest are the escalators, which combine the monumentality that is appropriate for escalators in a museum and the exhibition of technology. Consider the route that these escalators take, where the user, while using them, is inside and outside the building at the same time.

Volumetrically the building is completed with a series of cantilevered boxes that contain the rest of the program of uses.

The lower truncated pyramid volume becomes a large stairway – terraced seating area, making the walls of the building into a prolongation of the urban space, while at the same time the west facade will become a vantage point looking towards the future museum of photography.

These facades-roofs are formed by superimposition of various geometrical patterns, which result in a structure of intertwined beams, with gaps that allow light to filter through. The sections show the spatial environment that the visitor will experience, both on the ground level -lobby, cafe, and shop-, as well as the perimeter circulation spaces of levels 2 and 3.

The great plasticity of the projection defined by the upper truncated pyramid volume can lead one to believe that we are confronted by a problem that is difficult to resolve. However, the structural layout in section gives us a much clearer and reassuring understanding when we visualize the great simplicity of the concept. The principal vertical support consists of the walls that comprise the central 24 m x 24 m boxes. These walls support the beams, whose projections provide support for the upper levels. These projections, far from being a problem, help to reduce the bending moment in the center of the beams, as can be appreciated in the moment diagram. It is a structural strategy that is very similar to that of traditional pagodas. 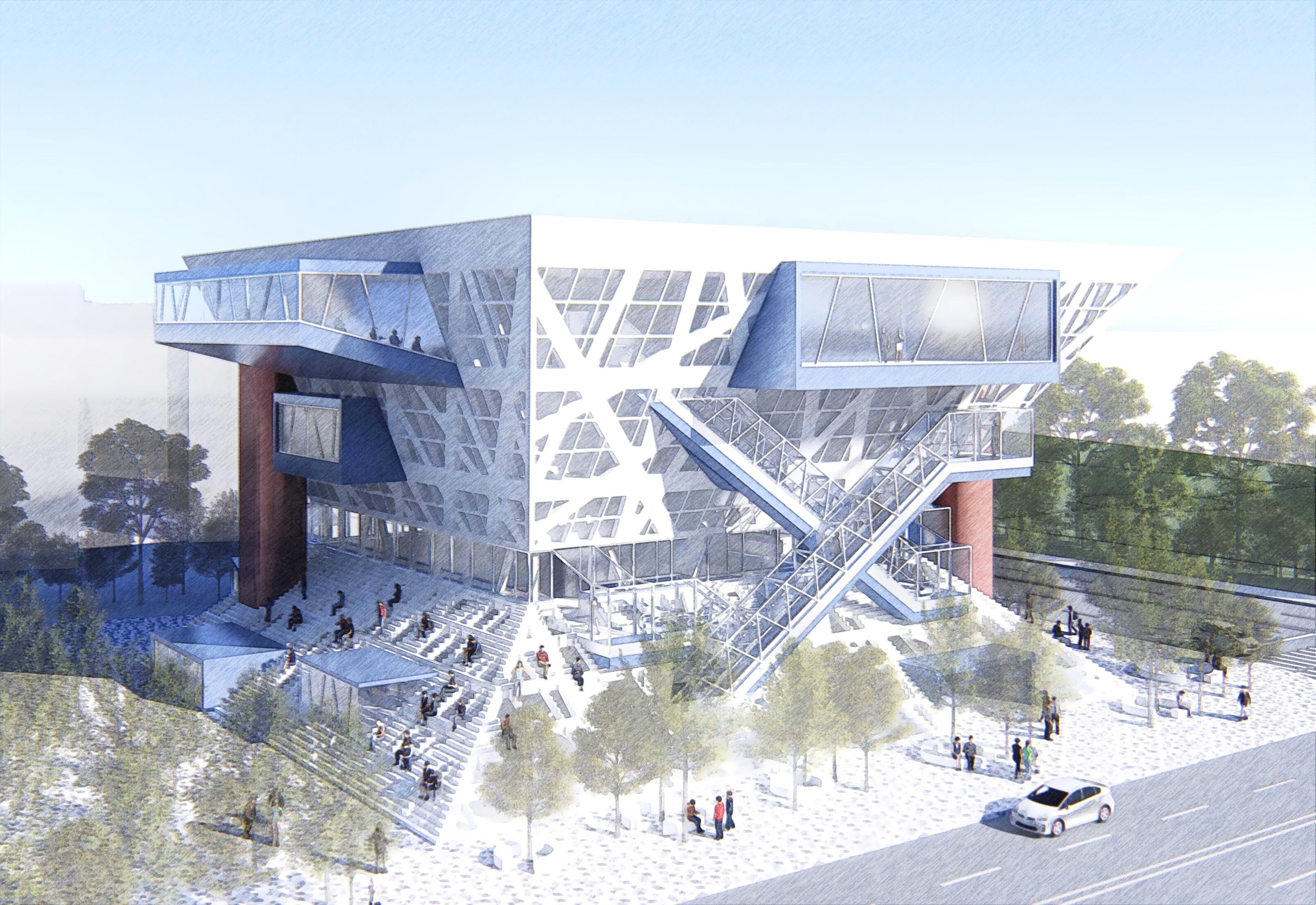 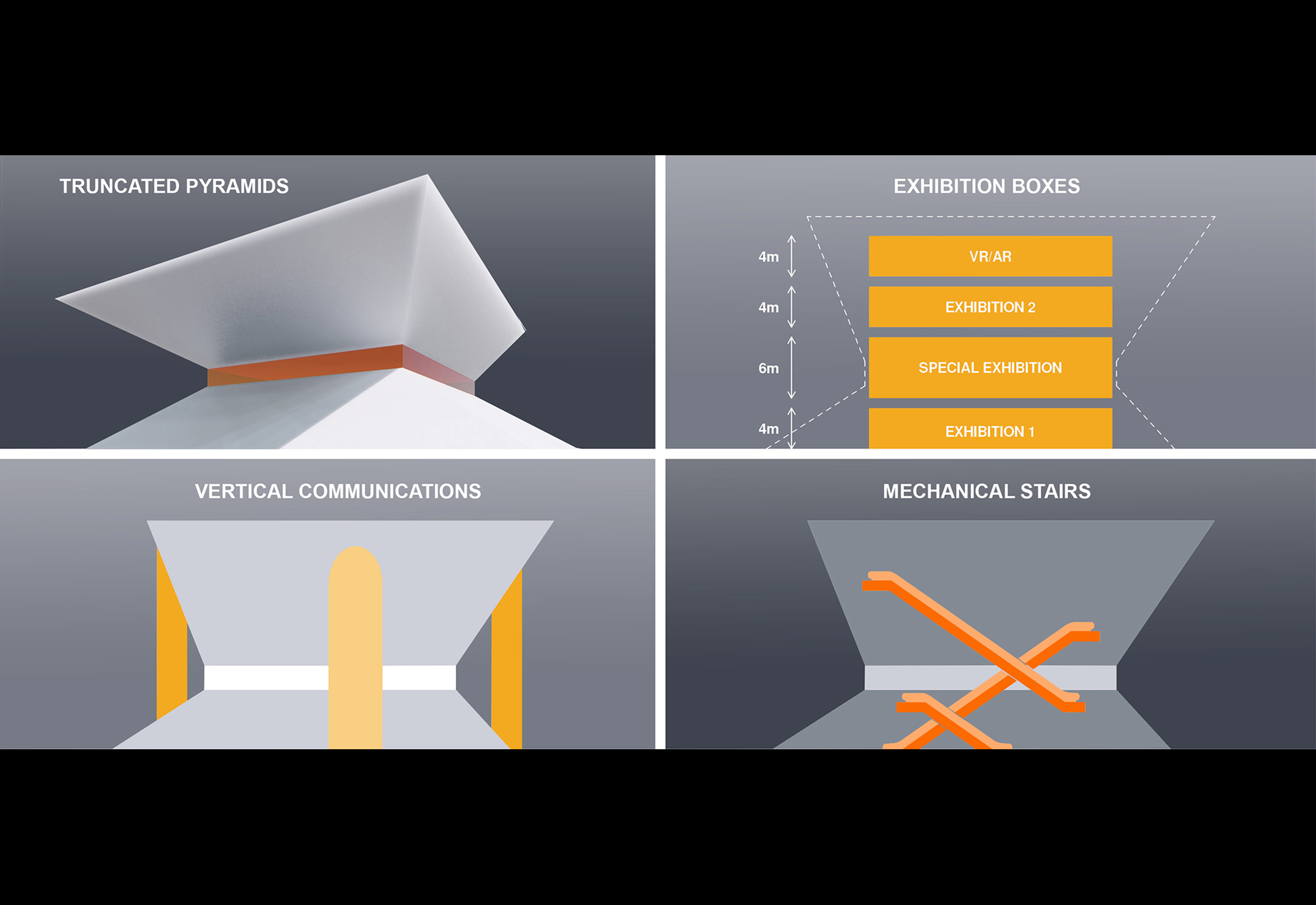 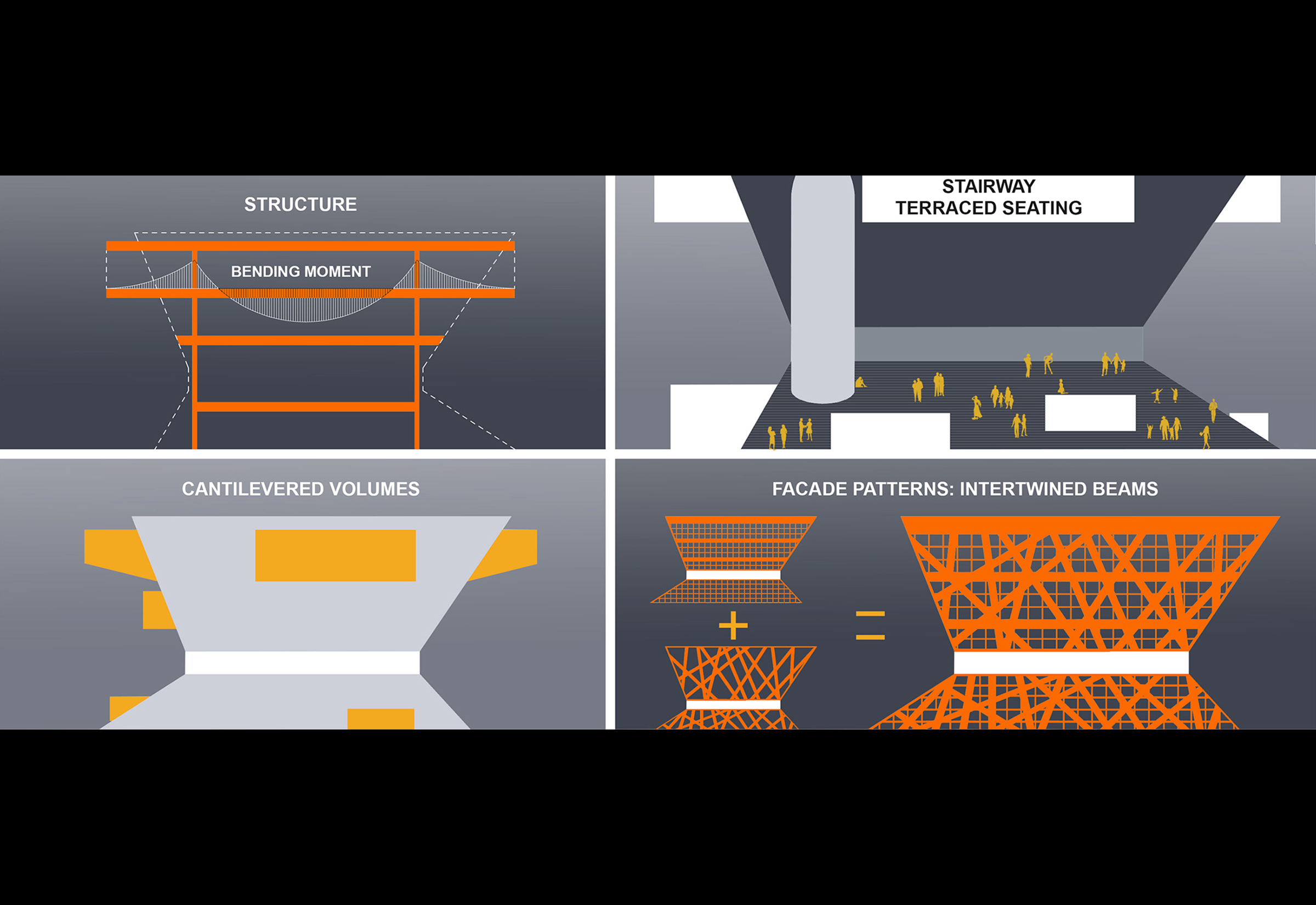 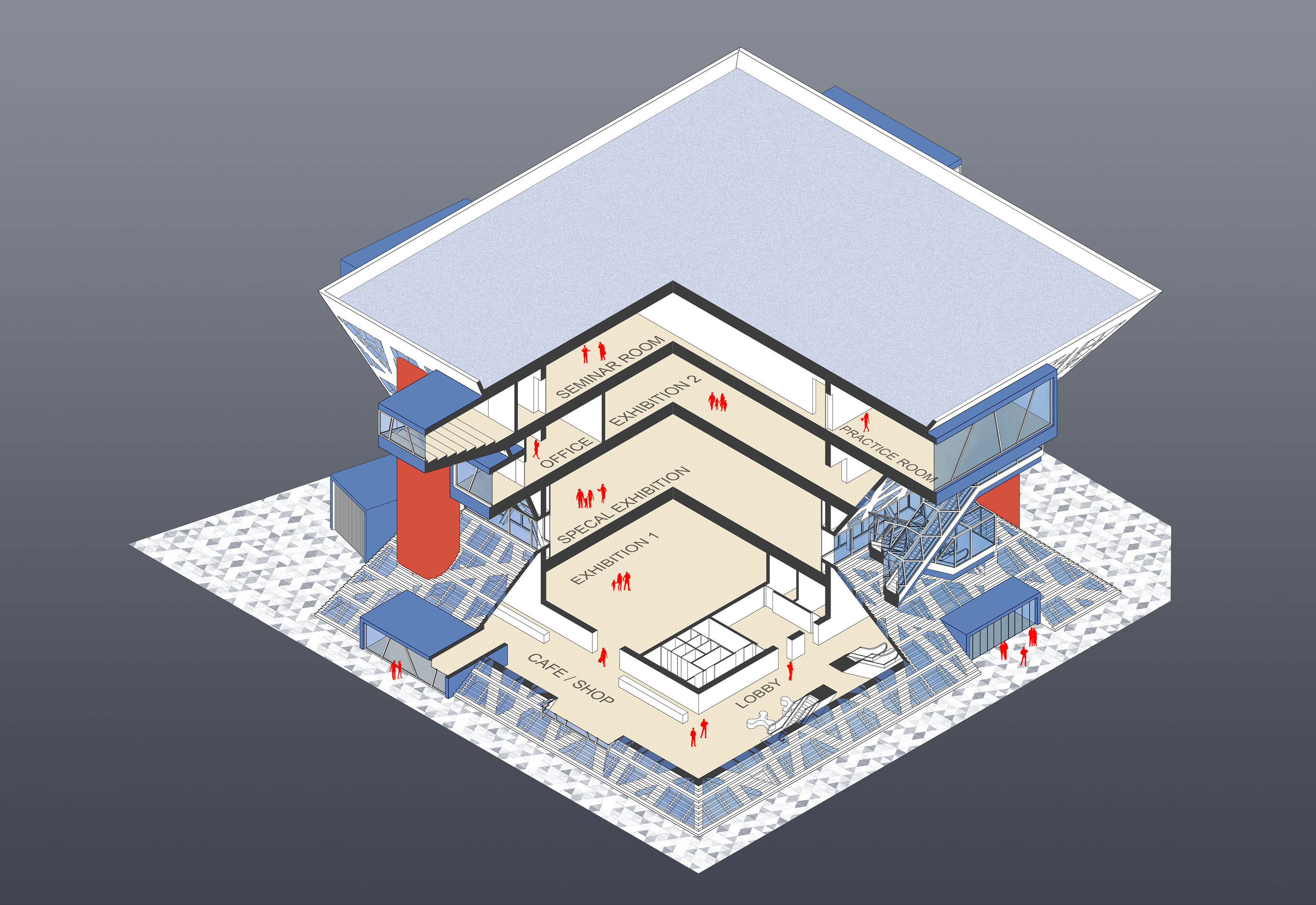 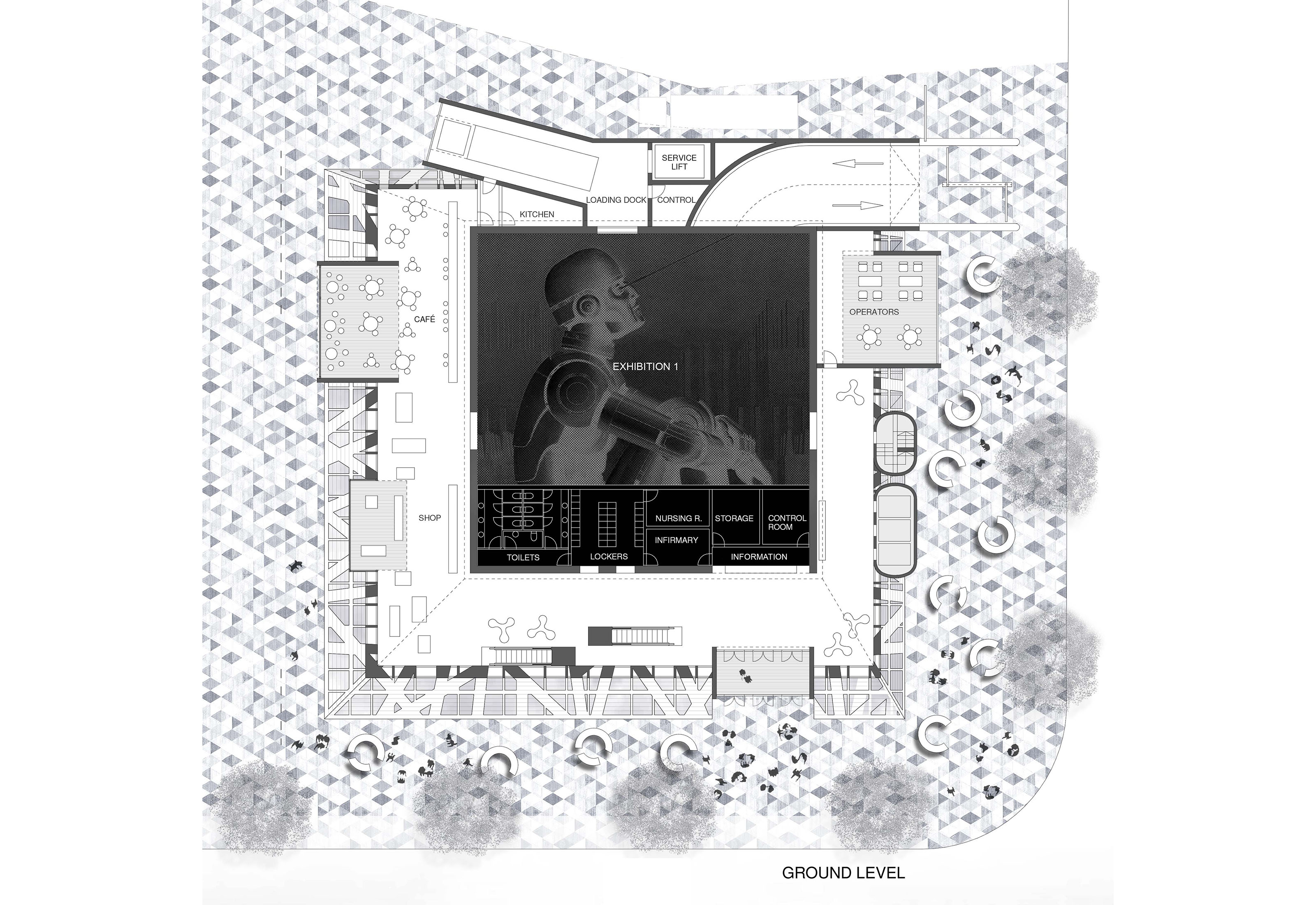 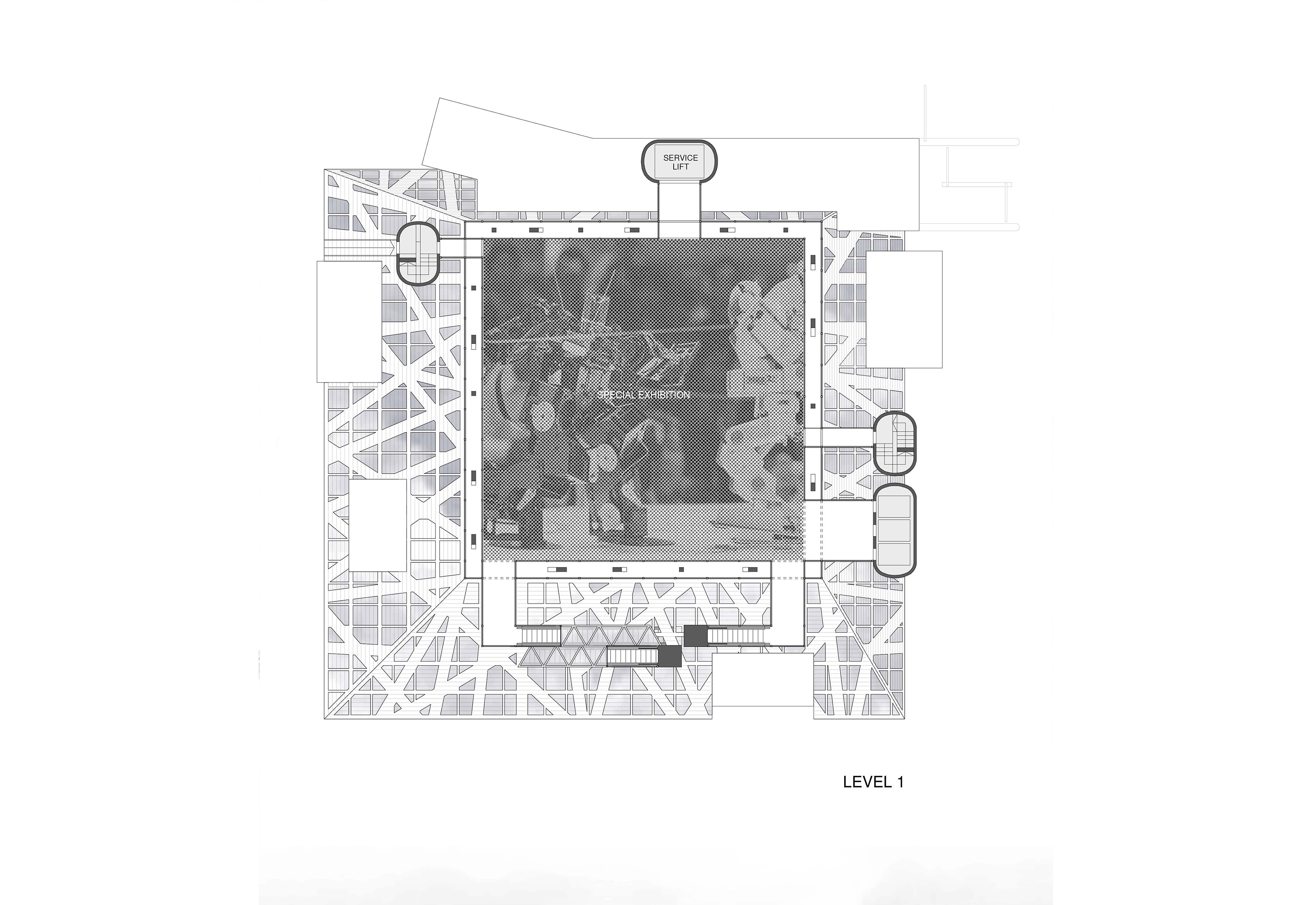 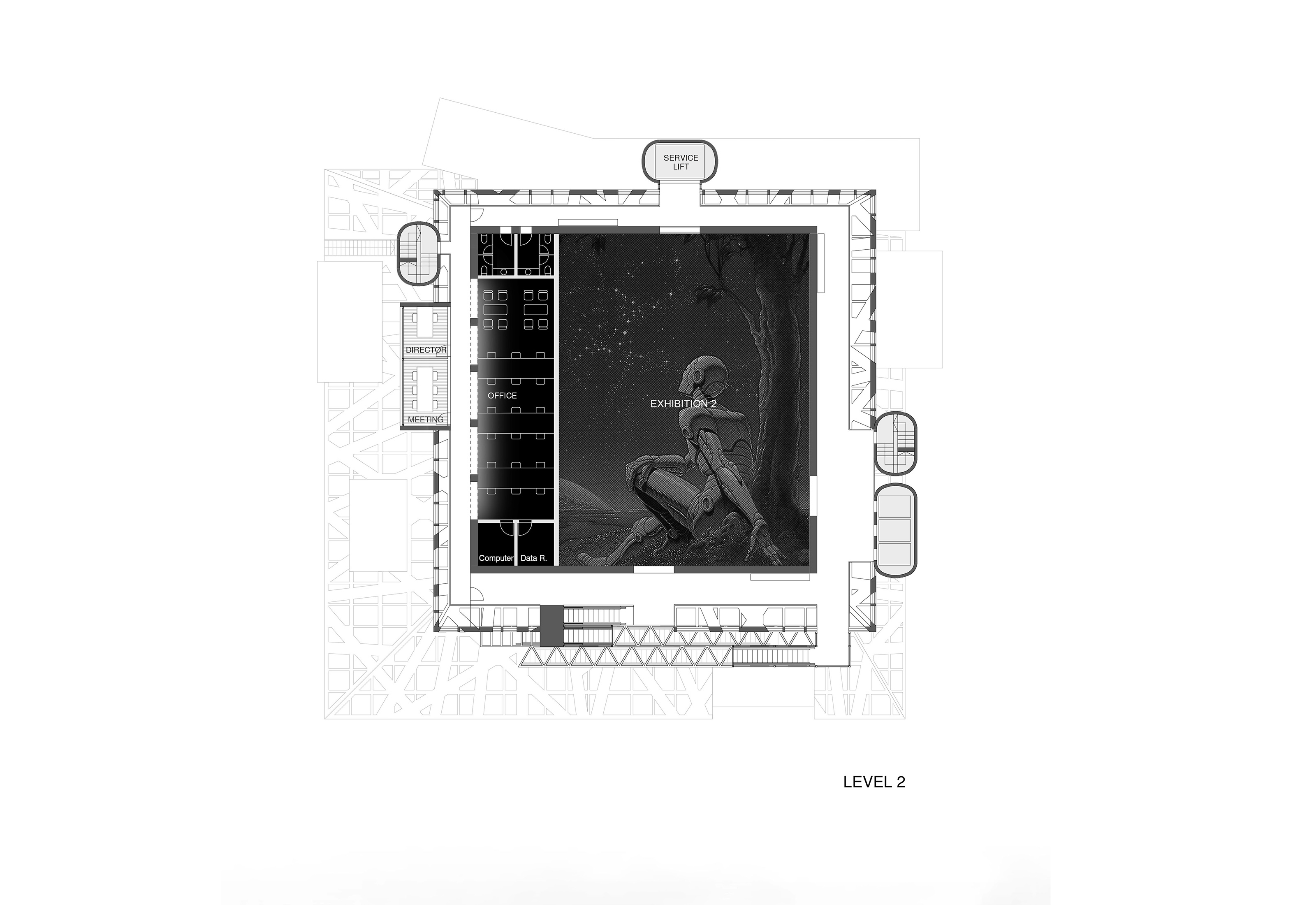 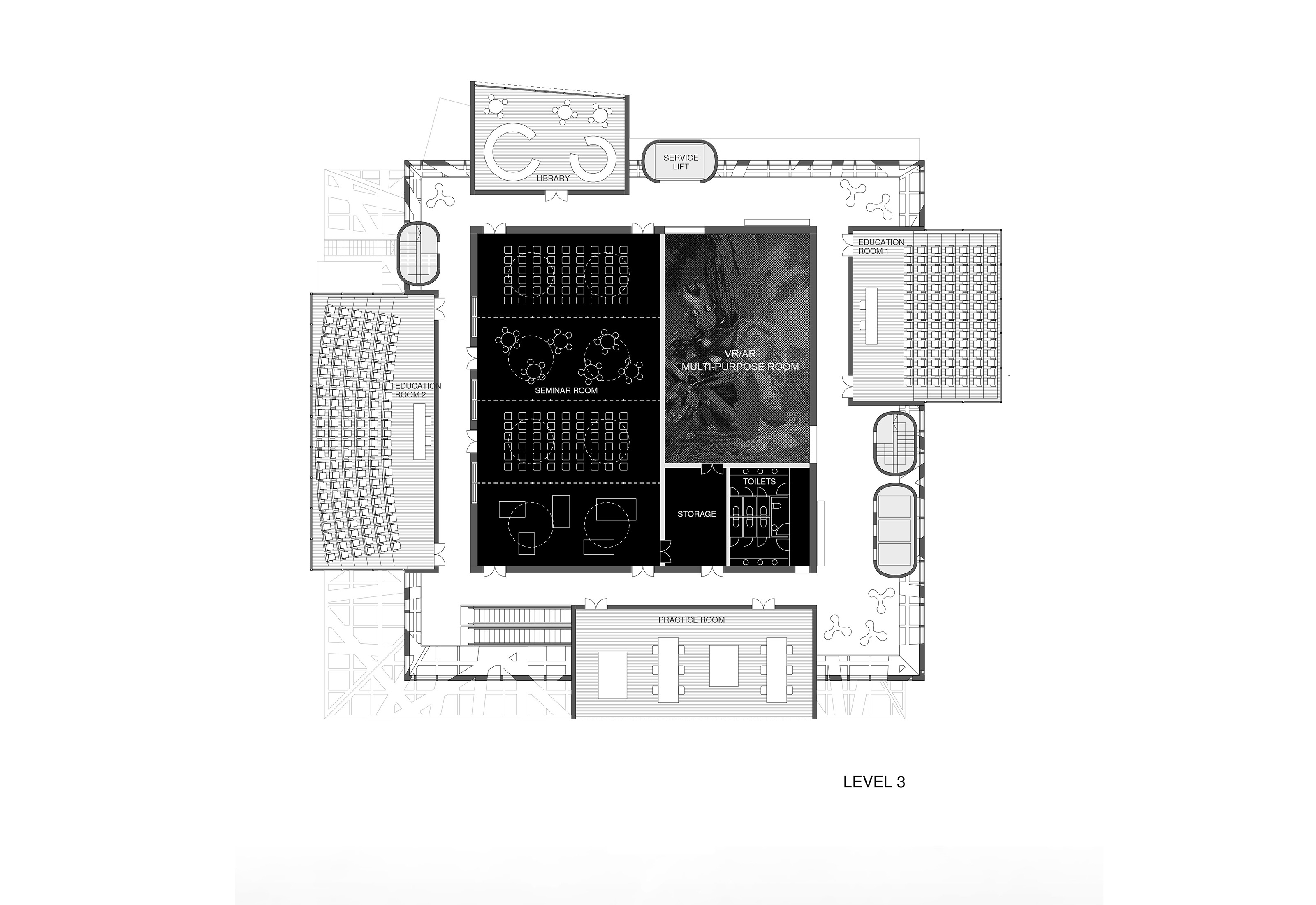 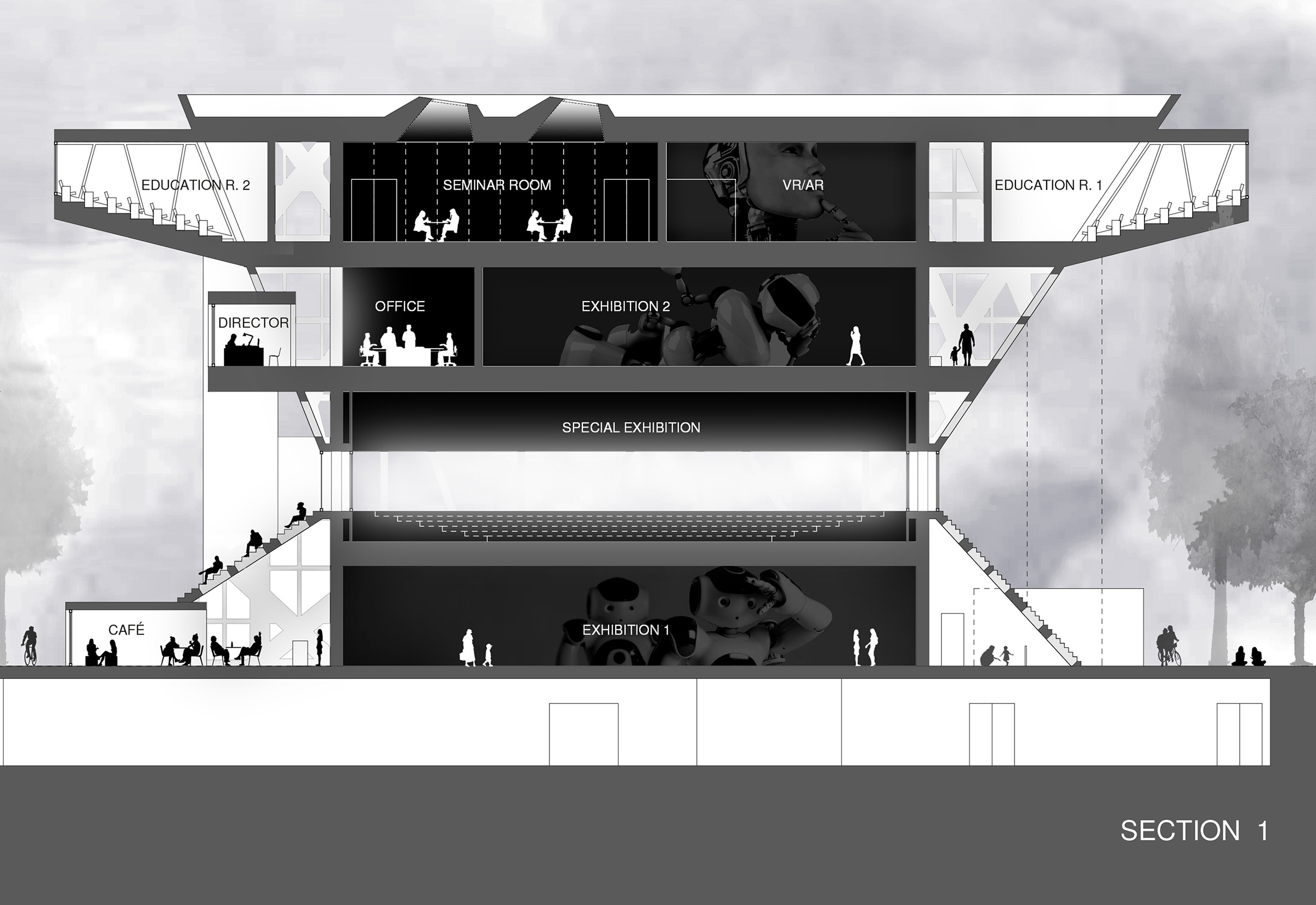 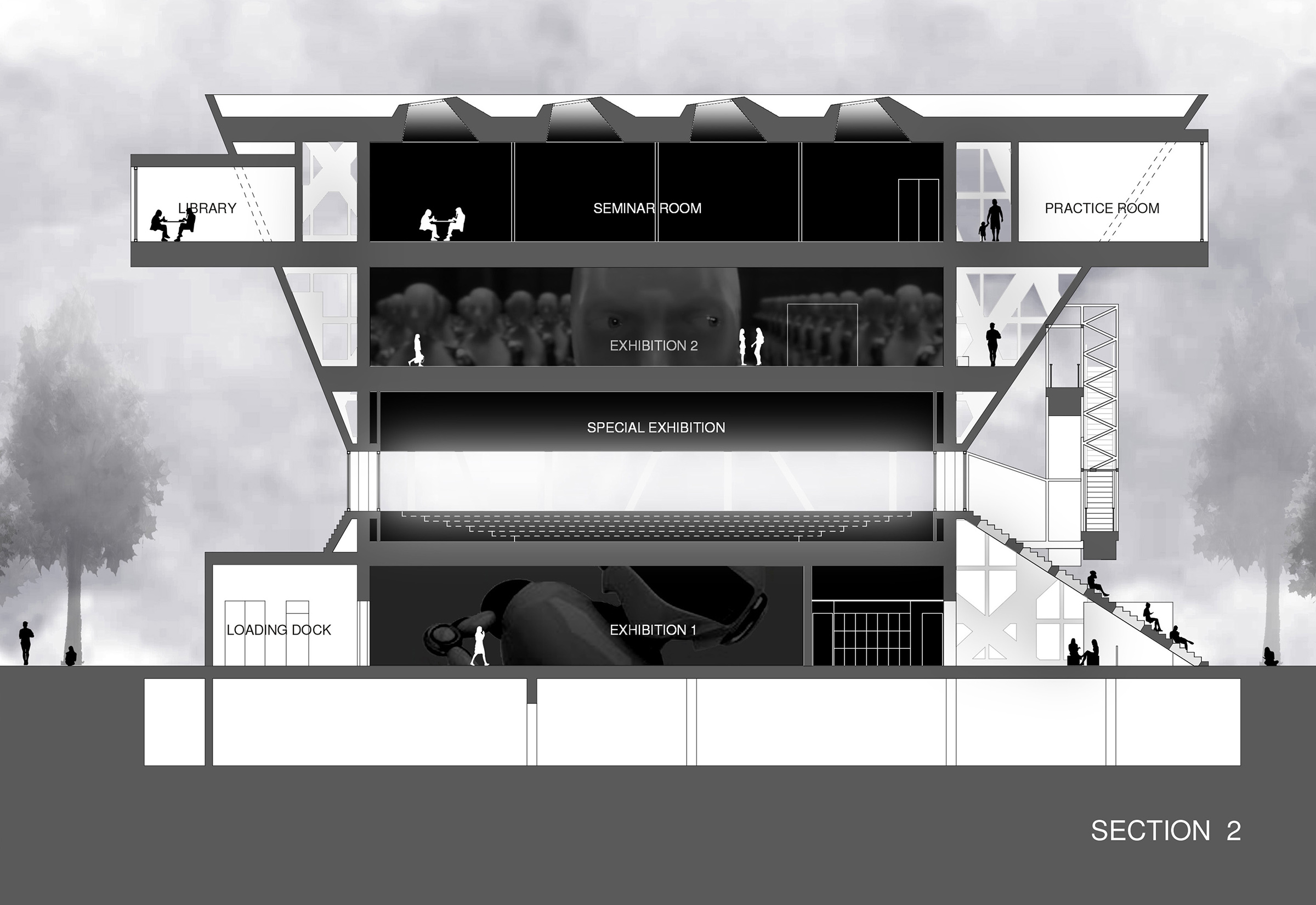 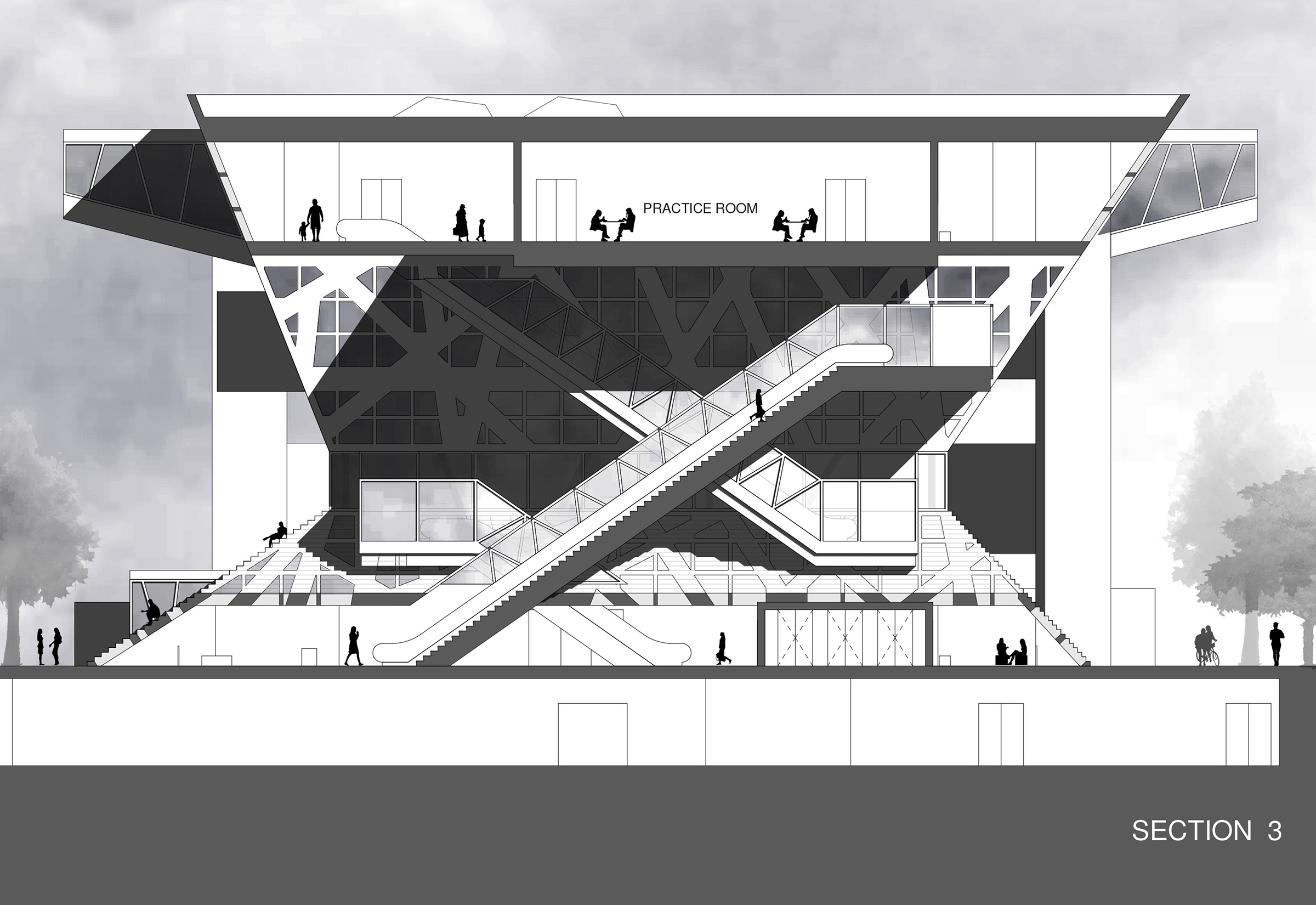 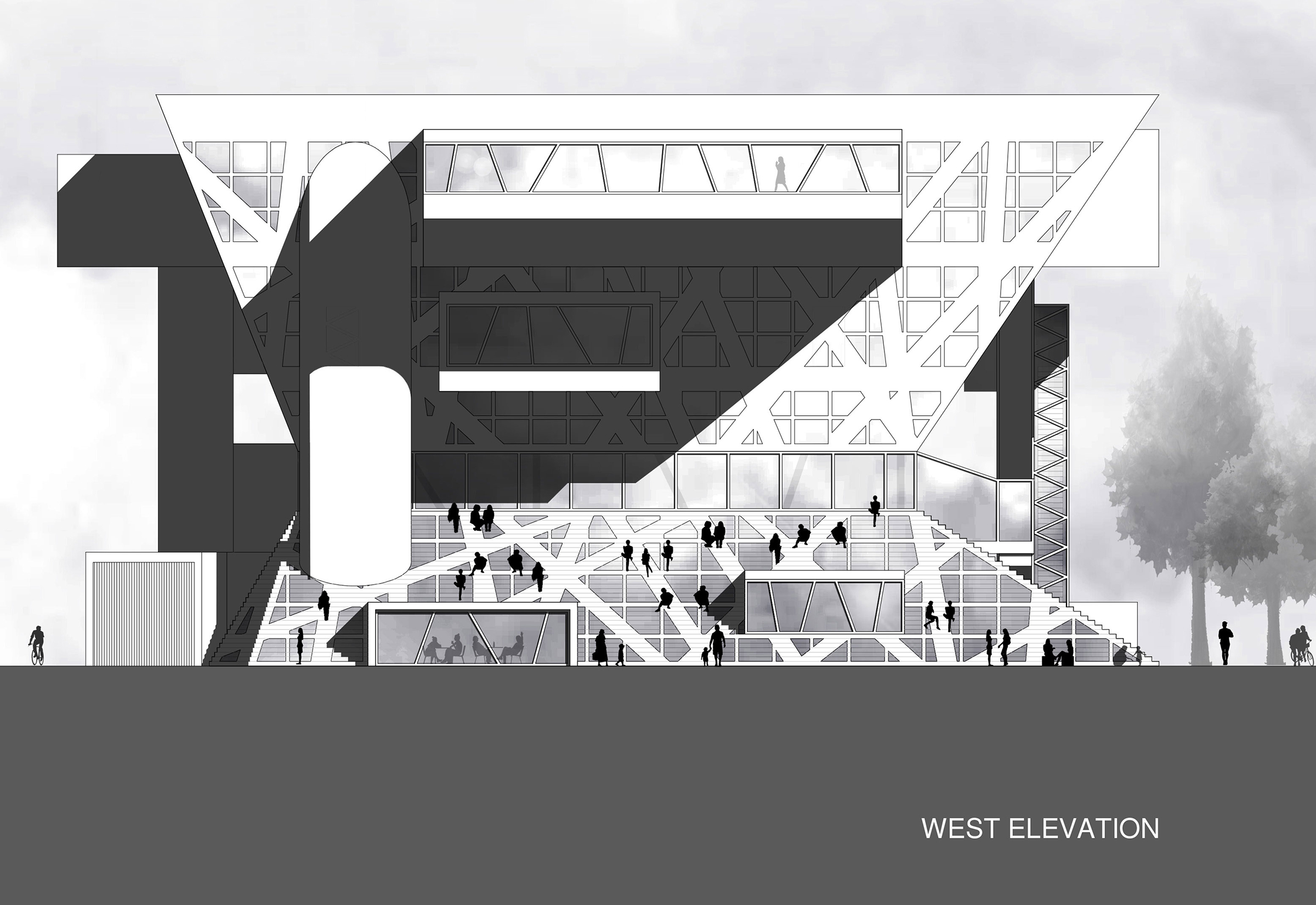 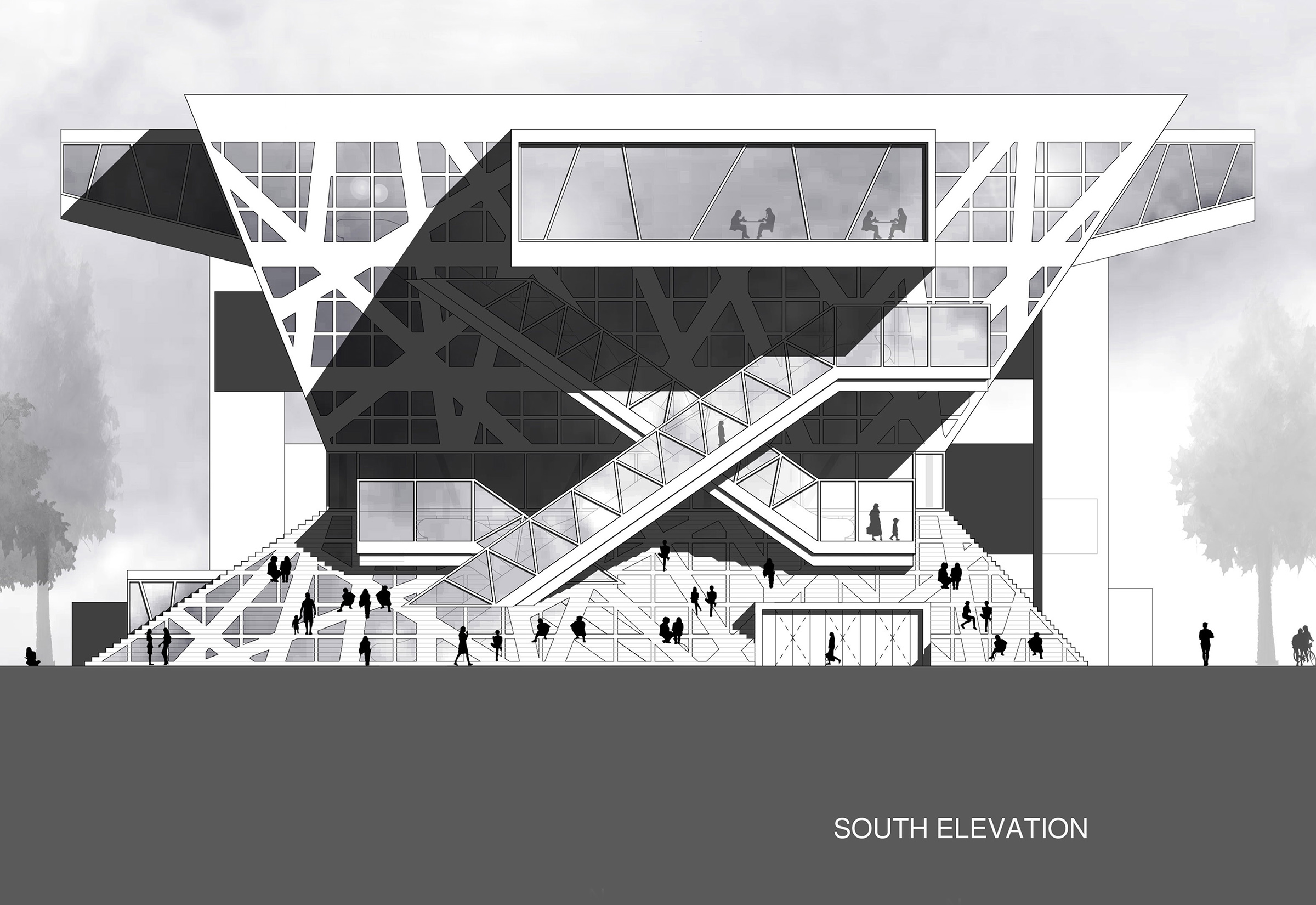 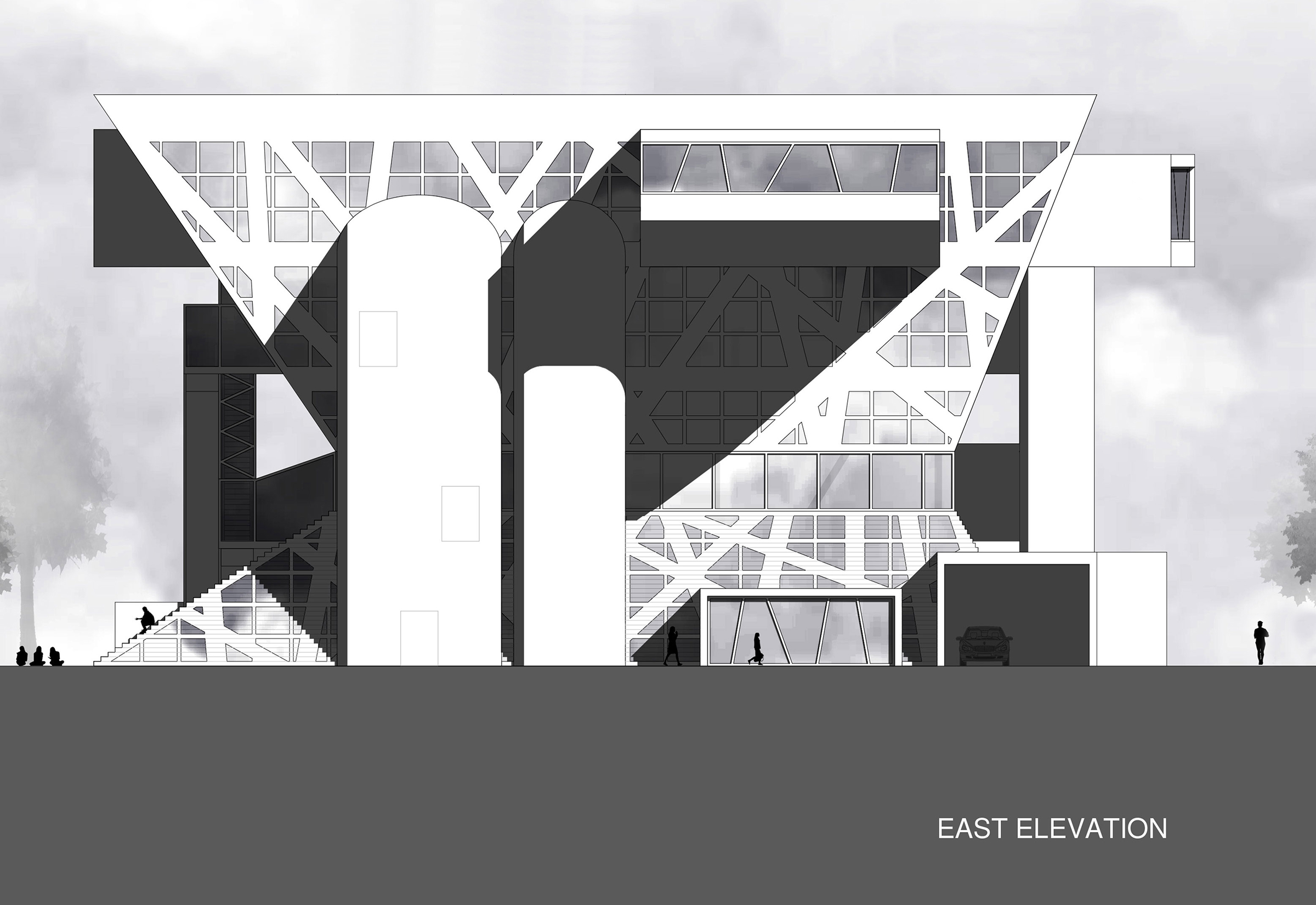